Designer John Oetgen has a philosophical reason for loving this unconventional home, perched high on a hill in northwest Atlanta overlooking the city. “It’s not a typical Atlanta or Southern home,” says Oetgen, who has been one of House Beautiful’s 100 Most Influential Designers in America since 1995. “It’s an honest thing unto itself.” The postmodern house—featuring a mix of old and new styles from Palladian to contemporary—was built in 1990, designed by the late architect Roy Frangiamore, who worked on projects like the Center for Puppetry Arts and One Georgia Center. The reflecting pool, flanked by an allée of daisies, sits in front of the house on lush, sprawling grounds designed by John Howard of Howard Design Studio. Double stairs with a graphic railing lead up to a dreamy arbor draped in trumpet vine that was wild harvested by the late landscape designer Ryan Gainey. “There’s a romantic garden feel about it all,” says Oetgen. The designer is old friends with the homeowners and created some of the colorful interiors. “We’ve had Christmases there—they’re kind of like family. I just get a special feeling when I walk up to it.” 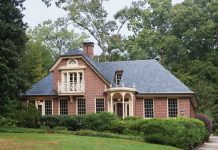 My Favorite House: A circa-1921 home in Druid Hills that defies categorization 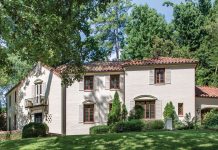 My Favorite House: This romantic, Spanish Colonial home in Morningside