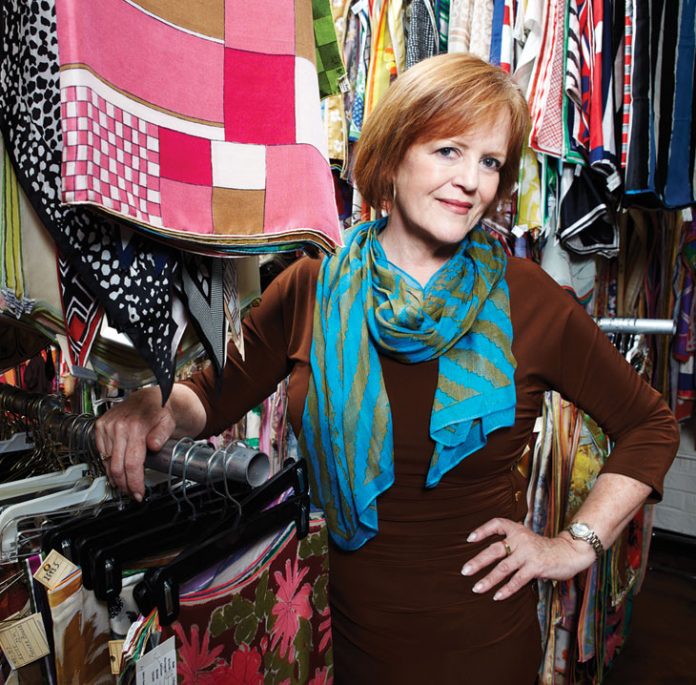 You may not recognize the name Vera Neumann, but chances are if you’re of a certain age—say, old enough to remember The Mary Tyler Moore Show—her artwork is as familiar as your mom’s tuna noodle casserole. In fact, your mom probably collected her scarves and tea towels, often signed with a ladybug for good luck. Certainly Mary and Rhoda would have owned one or two.

The New York artist built a $100 million brand during the 1970s, but her designs became as outmoded as Danish modern furniture during the 1980s and 1990s. (To guess where this story is headed, think about the turnaround in vintage modern furniture.) Today, Vera designs are hot items at major retail chains, from Nordstrom and Crate & Barrel to Anthropologie, whose Vera settee graced the cover of New York magazine’s Home Design issue in 2010. How another savvy female entrepreneur engineered this comeback from an obscure brick office in Chamblee is almost as fascinating as the artist’s own success.

Susan Seid, a Boston-area merchandising executive, moved to Atlanta to revive the Tog Shop, a staid, fifty-year-old catalog business. On a tour of the factory in Americus, the president took Seid into a remote storeroom above the plant, where she was stunned to find racks, piles, and boxes of Neumann’s work, all copyrighted and nearly forgotten. “There were 20,000 scarves,” says Seid, “each one more amazing than the next. I was so blown away, I was babbling. It was almost like when you fall in love.”

Six years after Neumann’s death in 1993 at age eighty-five, the Tog Shop had purchased her licenses to use on sportswear. Seid bought the rights in 2005, only to be sued by Vera Wang, who wanted to claim “Very Vera” for her Kohl’s line. Seid countersued, and the case settled in 2007—just in time for Seid to launch during a recession. Fortunately, cheerful, inexpensive prints sell well during hard times. It was a formula that had worked for Neumann after World War II, when she started her company by hand-printing scarves on surplus parachute silk.

Seid says Neumann basically invented designer branding: She was “like Martha Stewart and Liz Claiborne in one.” A pioneer of global style, Neumann traveled often and used ethnic motifs in her contemporary patterns. Long before Target, Neumann introduced innovations like melamine dishes and laminated place mats that made art affordable. The Museum of Modern Art, the Metropolitan Museum of Art, and the Smithsonian all paid tribute to her genius. Bess Truman used Vera fabric at the White House. And celebrity fans included John Lennon, Grace Kelly, and Marilyn Monroe, who wore Vera scarves (and nothing else) in her last photo shoot—images that are perhaps most iconic of all.