As Georgia’s weather starts its spring ascent toward another sweltering summer, it’s time to plant ginger.

Start in late March or any time in April with a hunk of organic ginger. That hunk is an underground growth called a rhizome, which tunnels just under the surface of the dirt, splitting all the way into new, delicious, gnarly fingers.

A cut-up ginger finger from the kitchen counter is fine to take to the garden if it’s still at least two inches long—so is a piece from the grocery store. Look for shiny nubs poking off the ginger or a claw-like sprout. That’s where new leaves and stems will emerge. (Splurge on organic: Conventional ginger may have been sprayed with chemicals to stop growth.)

Break up a big multi-fingered rhizome into separate lobes at the narrow parts using your hands or a knife. Plant each one six or so inches apart. Bury the hunks about an inch deep, nub sides up, in the best dirt you have, in the sunniest, hottest, wettest spot you can find. This family of plants comes from places like Indonesia and south India, so you’ll need to channel those climates.

Try a place near where a gutter downspout dumps water or where an air conditioner drips condensate. It’s kind of hard to overwater a tropical plant. And this one gets dug up in winter, so it’s not going to interfere with drainage. Cover the ginger bed with pine straw, mulch, or leaves to help the soil stay damp. It’s okay to buy dirt from the store if your yard dirt is hard to dig.

There’s not enough light indoors for this plant to thrive. A pot on a sunny porch is fine, but it’s got to stay watered.

If the ginger is getting the light, water, and soil that it wants, a spear of stem and leaf will start to poke out of the ground in a few weeks. In a few months, the plant will be about three feet tall. The rhizome will be spreading underneath.

Start watching the weather around mid-October—that’s when metro Atlanta can start to expect weather cold enough to kill tropical plants. Dig up your ginger before the temperature dips below freezing.

Dust away dirt, cut away leaves and stems, and see what’s left—hopefully a hunk of ginger, just in time for pumpkin pie weather. 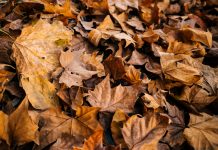 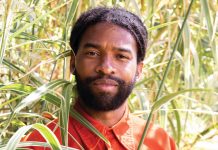