Honeycomb Studio is expanding into a larger space after working out of a 700-square-foot space for the past three years. Dubbed the Clay Shop, the part-studio, part-boutique hybrid is expected to open at 1240 Chattahoochee Avenue in early November.

Courtney Hamill is the creative force behind Honeycomb. Her ceramics are handmade using a wheel or cast from an original mold. She has a minimalist style, but with surprising pops of color and whimsical details. Her vases are among Honeycomb’s most popular items—a petite bud vase glazed in a coral hue is hand-painted with gold leaf, while another creamy white rectangular vase features a sprawling bubbly texture on the bottom half. Other wares include plates, ring holders, and decorations. You may have even seen her work while dining around town: St. Cecilia in Buckhead uses her dishes.

Hamill explains that the reasoning behind the new shop is twofold, noting that the studio will expand Honeycomb’s production capacity and grow the design business. As for the brick-and-mortar retail, while Honeycomb’s products can currently be purchased online, Hamill says there’s still something enchanting about entering a store. “We’ve all had that experience of being drawn to something and then walking over to pick up a ceramic planter or a mug or something. It just feels so good in your hands,” she says.

The shop won’t just be a showroom for Honeycomb’s products; it’ll also showcase ceramics from artists around the country, including Suite One Studio out of Greensboro, North Carolina; A Ways Away in Los Angeles; and Courtney Tate of Sandwich Shop in Atlanta.

Besides serving as a production studio and shop, Hamill is excited to open her doors to the community. Expect to see events with other local makers in the near future. “I’m just really excited about being able to bring more people in the studio [with] sales, open studio tours, and events. It’s just a really exciting way to open everything up.” 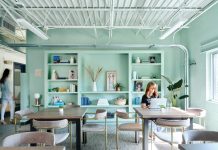 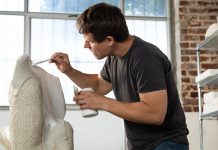