Multimedia ceramics artist Darien Arikoski-Johnson uses a rolling pin to spread clay across his worktable in his Atlanta Contemporary studio. Then, instead of cutting it, he folds over the edges and repeats the process until he has a shape that commands his attention. He describes it as “trained intuition,” and the result forms a unique starting point for his sculptures.

“I don’t want my work to be a lecture,” says the Minnesota native, who is preparing for a solo exhibition at Alan Avery Art Company. “I want it to be a conversation.”

Arikoski-Johnson adds other forms of media into his porcelain creations, including wire, steel, concrete, and his signature “glitch” photography: distorted digital images he derives by painting a watercolor, scanning it into Photoshop, altering it, printing it, and layering it onto porcelain molds. He stumbled onto this technique by mistake.

“I was trying to pull a bird out of a photograph in Photoshop, it would just keep repeating the image,” says Arikoski-Johnson, who is an assistant professor of ceramics at Georgia State University. “I was really frustrated; then, I realized it looked cool. It sent me down the path of thinking about how our perception is shifting based on computers.”

Technology plays an outsize role in his work. Handpainted gray and carved white squares appear on many of his pieces, representative of the pattern of negative space in photo-editing software and speaking to memory and identity in the age of social media.

“We’re all taking pictures of our experience, and I want that to be a part of my work,” Arikoski-Johnson says. “It’s disruptive. You stop having this real experience, and you insert interface in front of you. When we look at a photograph, we’re remembering the photograph, not the event itself. By engaging in manipulation of it, the work discusses it.” 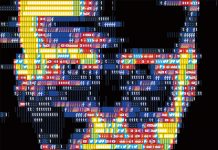