Interior designers David Ecton and Lance Jackson of Parker Kennedy may be based in Atlanta, but their bright style takes inspiration from Palm Beach. The duo updated this foyer with a bold Nina Campbell wallpaper. The motif is Atlanta’s civic symbol, the phoenix, repeated on a subtle Greek key background. “It looks timeless,” says Ecton. “And it has colors that bring the entry alive.”

Reflective art
Mirrors are one of the designers’ favorite accessories. “We like how images dance around in its reflections,” says Ecton. Geometric trim adds an architectural touch.

Shine on
This lacquered vintage Moroccan table adds a focal point in the back. Its broken marble top was replaced with a mirror.

Tip: Marble makeover
After replacing kitchen countertops, use leftover stone to give older furniture a fresh look. That’s what Ecton and Jackson did to this vintage console, now sporting a new Carrara marble top. “The whiteness of the marble makes the piece look brand-new,” says Ecton. 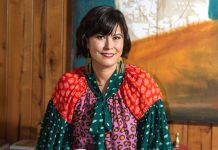 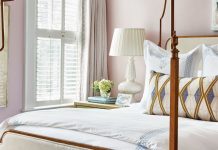