These oceanfront residences may just be Sea Island’s sweetest deal. Not only do they offer the convenience and (relative) affordability of shared ownership, but they also include year-round membership in the Sea Island Club for only a quarter of the annual dues—and no initiation fee (typically $100,000). “It’s the most practical way to own the best of Sea Island,” says project director Randy Burgess.

Location
The development is located within walking distance of the five-star Cloister at Sea Island.

History
Originally built in 2001 as a hotel, the property was converted to condos just before the recession. In 2014 the Ocean Residences revamped their sales effort, offering deeded quarter ownerships—the resort’s only fractional opportunities. The Cloister hotel itself, designed by noted South Florida resort architect Addison Mizner, opened in 1928.

Price Range
Prices start at $375,000 for one week per month in a fully furnished one-bedroom unit and range to $1.1 million for a penthouse share. Buyers purchase a piece of a specific condo, but annual scheduling rotates so that every week becomes available to them over a four-year period. An optional rental pool can provide income from unused weeks. An owner’s monthly share of condo and club fees starts at about $1,000 per month.

What’s Unique
Ownership comes with membership in 3rd Home, a travel club that allows owners to swap their weeks for stays at luxury second homes in more than 70 countries.

This article originally appeared in the Spring 2017 issue of Atlanta Magazine’s HOME. 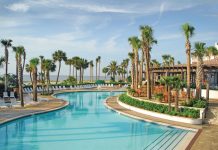