What it is: Callaway Gardens’ 20,000 azaleas, not to mention dogwoods, crabapples, daffodils, and tulips, are in top bloom during April. Track the peak with the website’s Azalea Watch. The forty-acre Callaway Brothers Azalea Bowl is the world’s largest azalea garden, with specimens massed around the one-acre Mirror Pond to create dramatic reflections. callawaygardens.com

Why I go: “When you have thousands of azaleas in a relatively compact area, that’s just a feast for the eyes. To see undulating pink and white and red on the hillsides—it’s really just spectacular.” —Walter Reeves, longtime WSB radio host, gardening expert, and author

Where to stay and eat: The Marriott-owned Lodge and Spa at Callaway Gardens. Callaway’s own Mountain Creek Inn was renovated in 2013. 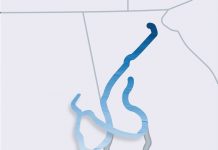