The neighborhood takes its name from rail workers in the 1880s, but it was also home to many prosperous Jewish merchants and, later, influential African American entrepreneurs. But by 1990 the area had lost nearly 70 percent of its population thanks to the construction of the interstates and Atlanta–Fulton County Stadium (and then Turner Field). The so-called urban renewal decimated local homes and businesses. Today many residents are optimistic that the Braves’ 2017 move to Cobb County could bring new attention and investment to the area, says Micah Rowland, former chair of the Neighborhood Planning Unit that includes Mechanicsville. “We’re waiting to see what’s in store.”

Central Location
Mechanicsville residents get more than just a free fireworks show, courtesy of Turner Field, through next season; they also have one of the best views of the Gold Dome and downtown. With the Connector and I-20 flanking the area and Garnett Station less than a mile’s walk, most of the city is 10 to 20 minutes away.

Cohesive Spirit
The NPU includes Adair Park, Capitol Gateway, Peoplestown, Pittsburgh, and Summerhill. Interstates split the area, but it still feels like one community. Families have lived in the shotguns and two-story homes for decades, but newer residents have been welcomed too; Rowland moved into a contemporary loft in 2006.

Leading Change
The Dunbar Center houses nonprofits, including the Annie E. Casey Foundation. Rowland recalls how his own nonprofit was embraced by the neighborhood: “People open doors and welcome new leadership.”

Beautifying Light
The community garden in Rosa Burney Park produces squash, tomatoes, and melons, offering fresh food to an area with no major grocery stores. For years the area has had more than its share of vacant lots, but residents are working to fill them with more community gardens. Rights 2 Life Foundation, a nonprofit that Rowland heads, plans to open gardens in each of the six neighborhoods near Turner Field by 2016.

Future Potential
Even though Rowland is sad to lose the Braves, he’s hopeful about the future. So far developers have floated projects like a GSU football stadium. Any development will benefit the neighborhood, he says, especially if it keeps opportunities within the community. What he’d really like to see? “A reconnection of the old street grid with housing, shopping such as grocery and affordable retail, and a transportation hub.” 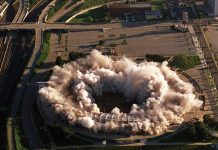