Atlanta Dogwood Festival
Where: Piedmont Park
When: April 13-15
Cost: Free
Details: Going into its 82nd year, the Atlanta Dogwood Festival is a staple during festival season. As always, there will be hundreds of artists from around the country showcasing their work, live music for the entire weekend, including Grammy-nominated folk rock star Shawn Mullins, the Mimosa 5K, and plenty of fun activities for the kids, too.

Atlanta Film Festival
Where: Various locations
When: April 13-22
Cost: $100+
Details: The Atlanta Film Festival is set to showcase more than 100 films—including narrative features, documentaries, and short films—throughout its 10-day span, ensuring that cinema-lovers and novices alike will be able to laugh, cry, and revel in the talent of filmmakers from across the world.

Cheers for Change
Where: SweetWater Brewing Company
When: April 15, 3-6 p.m.
Cost: $35+
Details: The Central Outreach and Advocacy Center is teaming up with SweetWater Brewing Company to raise awareness about overcoming and preventing homelessness. The night will be filled with food, live music, a brewery tour, a fishbowl auction, a Cornhole tournament, and of course, beer.

Jimmy Buffett
Where: Verizon Amphitheatre
When: April 17, 8 p.m.
Cost: $36+
Details: Bring your inflatable sharks and beach balls—Jimmy Buffett is in town. For one night only, he and the Coral Reefer Band will make a stop in Atlanta for Buffett’s 2018 I Don’t Know tour.

Grilled Cheese Festival
Where: Brookhaven Park
When: April 14 and 15 [Note: the event has been rescheduled to June 16-17. Check the festival website for more information.]
Cost: $32.50
Details: National Grilled Cheese Day is actually April 12, but this weekend festival will celebrate with grilled cheese sandwiches from more than 10 Atlanta restaurants. While you’re melting in each sandwich, enjoy frosty brews and live music from groups like the Chris Hamrick Band and Citizen Gold. 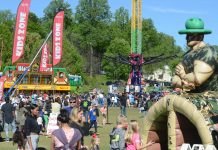