A3C Festival & Conference
When: Through October 13
Where: Various venues and concert halls around Atlanta
Cost: $200–$250
Details: Atlanta’s longest-running hip-hop festival has become a combination of an innovation summit and a chain of concerts. Expect panels featuring Stacey Abrams discussing the importance of the 2020 election, Dr. Paul Judge discussing startup secrets, and 2 Chainz and Dapper Dan discussing hip-hop and fashion; and concerts featuring Megan Thee Stallion, Lil Keed and Lil Gotit, and dozens of other up-and-coming hip-hop and R&B artists.

Atlanta Pride Festival
When: October 11–13
Where: Piedmont Park
Cost: Free, $15–$60 for some events
Details: Now one year away from its 50th anniversary, the Pride Festival is adding a Bi and Pan March to celebrate bisexual and pansexual communities. Start off the weekend with the Georgia Aquarium kick-off party and continue it with a Kesha-headlining concert series, the Trans March, Dyke March, and, of course, the Pride Parade on Sunday.

AFROPUNK
When: October 12 and 13
Where: 787 Windsor
Cost: $60 per day, $110 for weekend pass
Details: The annual music and arts festival is back with live performances by Anderson Paak, FKA Twigs, Brittany Howard, FEVER 333, EarthGang, and many more. Also on the lineup: a battle of the bands at the Basement Atlanta, a live Solution Sessions podcast, the SpinThrift Market celebrating DIY culture, and the Hair & Beauty Village.

Oakhurst Porchfest
When: October 12, noon–7 p.m.
Where: Oakhurst
Cost: Free
Details: Oakhurst is about to transform from a quiet neighborhood to a multi-block concert series. Bands will take up the front porches of dozens of hundreds of houses playing genres spanning from folk, jazz, rock, A Capella, blues, R&B, pop, and more. As you roam the neighborhood, keep an eye out for various art pop-ups like face painting and chalk drawing on sidewalks. And speaking of chalk…

Chalktoberfest Craft Beer Festival
When: October 12 and 13
Where: Historic Marietta Square
Cost: Free, $40 for beer festival tickets
Details: Eighty-six chalk artists, 40 breweries, 120+ beers, and 20+ wines. Enjoy sipping on brews and wine while watching skilled artists draw incredible chalk art. There will also be live music and an artists market. All proceeds will go to the Marietta Cobb Museum of Art. 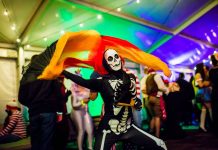 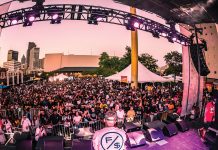