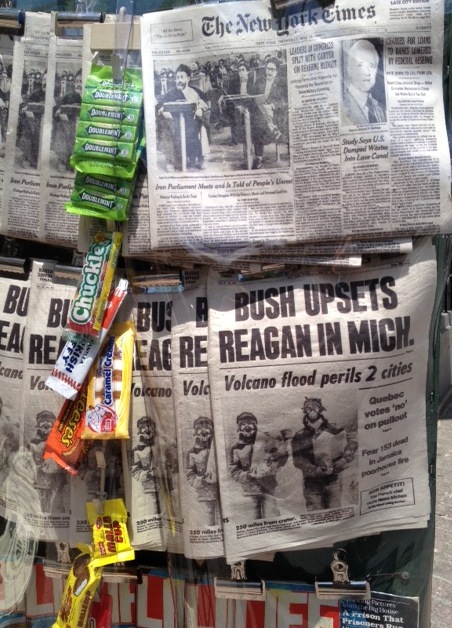 If you work in downtown Atlanta you know (a) it’s impossible to just walk out and hail a taxi and (b) there’s no such thing as a sidewalk newsstand around here.

So the yellow cabs lining Peachtree Street were the first sign I’d wandered onto the location shoot for “Anchorman 2.” Any doubt was quickly confirmed by the headlines on display at the Fairlie-Poplar news kiosk: “Bush Upsets Reagan in Mich.” and “Study Says U.S. Dumped Wastes into Love Canal.” Sandwich boards touted 69-cent pizza slices and I spotted a New York Post delivery truck. Auburn Avenue was rechristened E. 26th Street.

But what really transformed the heart of Atlanta into seventies New York? Big piles of trash, overflowing metal cans and spilling onto the sidewalk.

“Now that’s something you don’t see every day in downtown Atlanta,” remarked a man watching me snap a photo. “Just look at that garbage.”

Central Atlanta Progress, I think you have a new marketing slogan.