Home Sports And Now We’re Here: Hawks in Game 1 of the Eastern Conference... 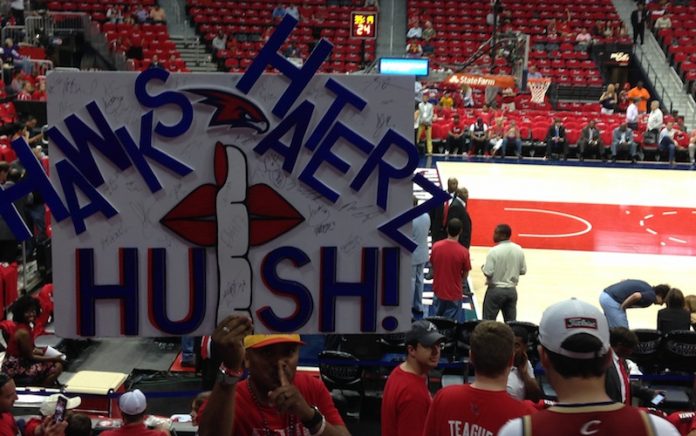 The parking attendants were dancing in the underground lots. “By five,” one said an hour before tip-off. “We got this game by five.”

And why not? Sure, our Hawks have never come this far before—to the Eastern Conference finals, the last rung in the ladder to basketball heaven—but everyone gets a day in the sun. And the opponent? The team from Cleveland with the guy whose name is known around the world, who has been to this advanced round of the playoffs six times before and won five of them? So what. Really. Zeus’s lightning bolts misfired sometimes, zapped him in the foot. That’s what we told ourselves as we packed into Philips Arena last night wearing our (a little too new) Hawks gear and our hearts on our red, white, blue, and silver sleeves.

We weren’t alone, either. Looking around, you could hurt your neck. There was NBA great and new team owner Grant Hill. And billionaire Spanx founder Sara Blakely, who also bought a share of the Hawks for fun. And Jerome Bettis, the hall of fame football player, who just wanted to watch. And, yes, that was Ludacris in the stunner shades not far from Floyd Mayweather, who didn’t betray his loyalties (if he has any) or the location of his Diamond Hermès HAC 50 Crocodile Money Bag (though it must have been nearby, to buy snacks). The rapper 2 Chainz sat courtside in what USA Today called a “resplendent poncho,” as did a bearded and bored-looking Ted Turner, with his legs crossed and his mouth mostly shut, beside mayor Kasim Reed, who was smiling ear-to-ear. Ted opened his eyes a bit wider during timeouts, when cheerleaders came out on the floor, but few words emerged. Or so it seemed from the squinty eyes of press row.

It was a big game, on home court. And for the first 24 minutes of the contest, the Hawks played like it was their Bar Mitzvah. Like the record 60 wins they earned this season were foreshadowing, not false hope. And the crowd roared with approval, reaching rare decibel levels, as the Hawks outscored the Cavaliers in the first quarter. My ears are still ringing.

In the first quarter, the Hawks shot 63 percent and the Cavaliers just 39 percent. LeBron got in foul trouble and Kyrie Irving—Cleveland’s magical point guard, LeBron’s Robin—appeared hobbled. This meant that Irving’s backup from down under would have to take over. That’s always a good thing. (Name an Aussie in the NBA. Thought so.) The second quarter was a fight, but we were all square at halftime: 51-51. Then, in the third quarter, J.R. Smith—the neck-tattooed, human question mark, who the Times kindly called “gifted and capricious“—started making three-pointers like his mother’s health depended on it. He ended up making eight of them, a Cavaliers playoff record for a single game. Meanwhile, the Hawks couldn’t grab a rebound; their best shooter, Kyle Korver, led them for much of the game with five. Not good.

Poker-faced point guard Jeff Teague was on his way to an easy-looking 27 points. Athletic backup shooting guard Kent Bazemore did an admirable impression of a starter, making a monstrous dunk in the waning moments of the third quarter. But it was the exclamation point on the end of an unhappy trio of sentences: The Hawks went cold in the second half! And LeBron pushed and shoved his way to 31 points! And the Hawks DeMarre “Junkard dog” Carroll went down with a gruesome-looking knee injury! Cows, provided by Chick-fil-A, fell unhappily from the sky.

The low-point for me came when a Cleveland fan, drunk and on the cusp of victory yelled towards me. I was wearing a grey T-shirt, which he supposed meant I was on his side.

“Hey Cleveland guy,” he said, gesturing at his phone. He wanted a picture.

The sighs, as it turned out, could be heard around the world. Tip off was 6:15 a.m. in Nepal. Patrick Adams—a 36-year-old Atlanta writer and photographer reporting on public health in Kathmandu, got out of his tent at a quarter of six. “I’ve been sleeping in a house,” he said by email, “but because we had a decent aftershock yesterday, I opted for the tent next to the Pakistani refugees in our front yard.” A lifelong Hawks fan, he walked a mile to the Shangri-La Hotel, where he’d been when the largest earthquake shook the country a month ago. “The hotel has a decent Internet connection,” Adams wrote, “and the Japanese army medics had left the night before so it was quiet, but I didn’t have NBA League Pass. So I tuned into 92.9 The Game. Solid first half. But the second sounded like a disaster.”