Home News & Opinion Any bets on how long before the Emory trustees can James Wagner? 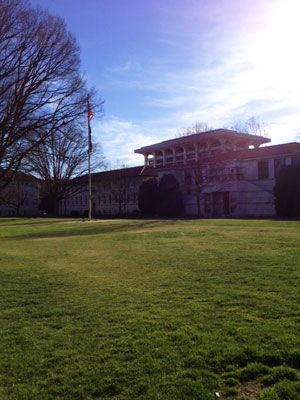 Just as Lindsay Lohan’s dissolute ways have earned her a designated Death Watch on the Internet, we have to wonder how long before Emory University President James Wagner gets his own countdown. In this case, to his firing.

On Wednesday the Emory College of Arts and Sciences faculty voted to censure Wagner, and are reportedly considering a no-confidence vote. This comes in response to Wagner’s ham-handed column in the school’s alumni magazine that held up the Three-Fifths Compromise of 1787 as an example of good leadership. (Civic refresher: As part of that compromise between Northern and Southern states, each slave would be counted as “three-fifths” of a person by census-takers.) The thing went viral, of course: CNN, NPR, Salon, Gawker, Twitter, The Chronicle of Higher Education, Inside Higher Ed, DiversityInc, on and on.

As editor-in-chief Evan Mah writes in the Emory Wheel, faculty members were “shocked that Wagner had to be told that his column was offensive and that he was unaware of the potential backlash.”

Well, wow. This seems as good a place as any to mention Wagner’s salary, which has been put at $1.2 million a year. Evidently that’s not enough to find a leader with a modicum of common sense. I mean, we’re talking about one of the most prestigious universities in the country, a place sitting atop a $5.4 billion endowment as it charges students up to $54,900 per year. Oh yeah, and it’s Black History Month. And this is Atlanta.

Perhaps now is the time for some context. Wagner’s column came amid the backdrop of controversial cuts that he spearheaded at Emory. Last fall, the university announced it would eliminate the journalism program, visual arts, physical education, educational studies, and graduate programs in Spanish and economics. Such cuts would result in about forty people losing their jobs. It’s important to remember that these cuts were not a product of economic straits (endowment investments alone last year netted $100 million) but rather would permit the university to devote more resources toward fields that administrators saw as greater priorities: neurosciences, China studies, digital media.

Wagner’s absurd example of the slave compromise was an attempt to put a big smiley-face Band-Aid over what has become an oozing scab at Emory. He wanted alumni to think his administration was happily compromising with the very people and programs it is purging from the campus while marching forward to an even more glorious future for the health and science programs. He ends his column by saying: “I am grateful that we have at our disposal the rich tools of compromise that can help us achieve our most noble goals.”

The thing is, he and his administration did not use the rich tools of compromise.  The discussions about cutting the programs were conducted by a committee in secret. People were tricked and deceived. The head of the committee that studied which programs to axe, political science Professor Micheal Giles, admitted “he would always ‘lie’ about how well everything was going” when asked by colleagues how the situation was looking, according to another Evan Mah article, this one from last fall in Wheel. (Disclosure: Mah was an Atlanta magazine intern last summer. And will graduate this spring from Emory’s doomed journalism program.)

Let us speak now specifically of the journalism program, a field close to our hearts. Just weeks before Emory announced it was killing the program, it named Pulitzer Prize-winning author Hank Klibanoff, former managing editor of the Atlanta Journal-Constitution, as program director. That’s like promoting someone to captain of the Titanic after it hit the iceberg.

Dean Robin Forman has been busy defending the decision to dump journalism. In a letter to one concerned alumnus, he wrote: “We are also reimagining, and expanding, our undergraduate interdisciplinary majors in novel and exciting ways. Effective writing has always been an important element of such programs, and journalism may play a role in their future. Finally, journalism is less about conveying information than it has ever been—we have immediate access to all of the information we could ever need—and is much more about providing context and analysis.”

Um, Dean, the reason you have immediate access to all the information you could ever need is that much of it has been gathered and disseminated BY JOURNALISTS.

Forman’s letter was posted on an Emory Journalism alumni Facebook group. Now, a lot of Emory graduates know that the dean responsible for killing the journalism program has no earthly idea what he’s talking about.

Emory spokeswoman Nancy Seideman did not return a call for a response this morning. She did write the statement that appeared in the Emory Report on Tuesday after the online publication of the original column and Wagner’s apology.

Back to President Wagner. At last night’s meeting, faculty members also voted narrowly in favor of a “formal and neutral review of the decision-making process” behind the cuts.

The PR folks at Emory have been earning their salaries these past months. Besides Wagner’s foot-in-mouth disease and the much-opposed program cuts, last August the university acknowledged that it had intentionally fudged the SAT and ACT scores of its students. Then, two months later, Wagner publicly apologized for the anti-Semitic tenure between 1948 and 1961 of a former dean of the dental school, which resulted in 65 percent of Jewish students being kicked out or forced to redo coursework.

As the president of Emory’s Student Government Association, Ashish Gandhi, pointed out in an email yesterday to the Emory community: “This year has been one of revelation. The acknowledgement of misrepresented admissions data, an admittance of past anti-Semitism, and the implementation of curricula changes have made us realize the imperfections of our university. More recently, we have come forth in concern and disappointment over remarks made by students on The Dooley Show and by President Wagner in Emory Magazine.” He said the SGA “reaffirms a vision for Emory University, one which is more respectful and inclusive.”

In a December episode of The Dooley Show, a campus news satire program, some Emory students made jokes about lynching, tarring and feathering, and cross burning.

Good grief. Is there something in the water over there?

Doug Monroe is an editorial contributor to Atlanta magazine and teaches writing in the mass communication department at Georgia College in Milledgeville. Disclosures: Atlanta magazine editor Steve Fennessy is on the advisory board of Emory Magazine and the magazine’s deputy editor, Rebecca Burns, is an adjunct instructor in the Emory journalism program.