If you’ve spent any time in Atlanta, you’ve probably seen a bright turquoise, often square creature with an ever-shifting amount of eyes and a massive set of pearly white teeth staring at you from murals and billboards across town. The character, known as Larry Loudmouf, is the brainchild of street artist Greg Mike, a Connecticut native who has been living in Atlanta for the past 14 years. His murals are iconic to many Atlantans and draw visitors from across to state to snap Instagram photos of these trendy, brightly-colored walls. Below, he discusses how he created his signature character:

What inspired the design of Larry Loudmouf?
I grew up addicted to graffiti, skateboarding, and cartoons in the 1990s. Anything from Ren and Stimpy to Disney to The Simpsons, blended with Powell Perelta skate graphics. The Loudmouth was a re-occurring idea in my sketchbooks, which then made its way to stickers, canvasses, and murals across the globe.

What’s with the giant eyes and the single chipped tooth?
Larry Loudmouf’s eyes are constantly changing depending on his current situation. Sometimes he has three, for the better to see you with, or sometimes it’s only one when he’s in his “cyclops” state of mind. Larry’s chip tooth is a symbol of life’s imperfections; it was inspired by a near-death experience.

Woah. What happened?
When I was in my 20s, I had a vivid dream and went sleepwalking off a balcony. I woke up on the ground in a pool of blood and almost died. My tooth was chipped, my skull was cracked, and my face was covered in blood. From that moment on, I began incorporating the chipped tooth on all my characters. It symbolized that life was short, imperfect, fragile, and could change at any minute. When I see it and draw it, I think about that day and it inspires me to push the envelope and live life to the fullest.

So what does Larry symbolize?
In the beginning, it just symbolized my voice and my creative thoughts. But over the years with the thousands of “Loudmouf Says” phrases [where anyone can submit online a catchphrase for Larry to “speak” that is then published on billboards and merch], it’s now developed into a global art project. We’ve received submissions from people all over the world voicing their thoughts and beliefs through Larry.

Larry has become somewhat of an icon around Atlanta. What’s that like for you as an artist?
Larry Loudmouf was born in Atlanta, inspired by the streets and people in this city. The city has embraced Larry since day one and helped raise him into the character he is today. It’s inspiring to see Larry grow and just to be a part of it all. At this point, I am only one person in this larger community-based project. I help guide Larry, but the city, people, fans and followers are just as important to his growth and development.

What’s next for the Loudmouf?
I have a Los Angeles solo show currently in the works and a ton of exciting projects we can’t disclose quite yet. The Loudmouf Says forum is always open and we’re reviewing new submissions for sayings that could appear as artwork on walls, stickers, billboards, canvases. You never know where Larry will show up next . . .

What’s your ultimate goal as an Atlanta street artist?
Atlanta is a great place for art on the streets right now; get out and explore the beautiful work that drenches our city walls. My hope is to continue living vicariously through the Loudmouf and inspire future generations to follow their passions. If I can make someone smile or think when interacting with my work then I’ve done my job as an artist. 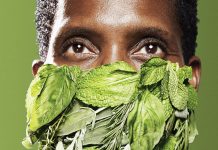