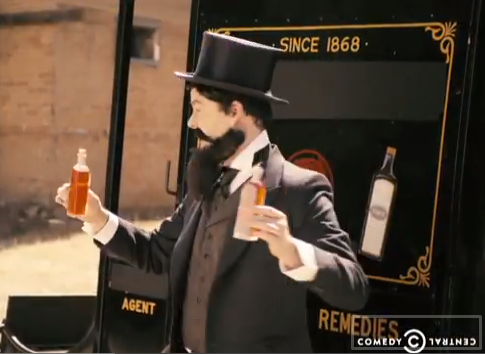 As someone who writes history books and drinks bourbon with enthusiasm, I’ve naturally added Comedy Central’s Drunk History to my must-watch list. While DH might be sophomoric it certainly delivers laughs, and, occasionally, a little bit of learning.

The premise of the show—a Funny or Die web series that made its basic-cable debut this summer—is simple: A C-list celebrity knocks back a shot (or five) and then slurs through an essentially fact-based script. The resulting tipsy voiceover rolls as historical moments are re-enacted by costumed A- and B-listers.

Comedy Central sent over an advance copy of tonight’s Atlanta-themed episode, and one thing I can assert is that it’s an equal opportunity offender.

The segment on Coca-Cola’s origin story makes much of the drink’s purported coke-fiendish early formulation. Purists may quibble that Coke marketing genius Asa Candler doesn’t merit a mention; I was happy to see John Pemberton, the pharmacist who came up with the concoction, finally get his pop culture due.

The second, and definitely most irreverent, segment delves into the FBI wiretaps of MLK’s reputed bedroom peccadilloes. Rob Riggle’s turn as a pruriently vindictive J. Edgar Hoover pulls the sketch back from the line it crosses, but only just.

The funniest bit tackles not a sacred cow but a lesser-known slice of Atlanta history: Stetson Kennedy’s infiltration of the KKK and his exposure of the Klan’s more ludicrous rituals. Kevin Nealon’s appearance as an inept Grand Dragon is his best work since the early seasons of Weeds.