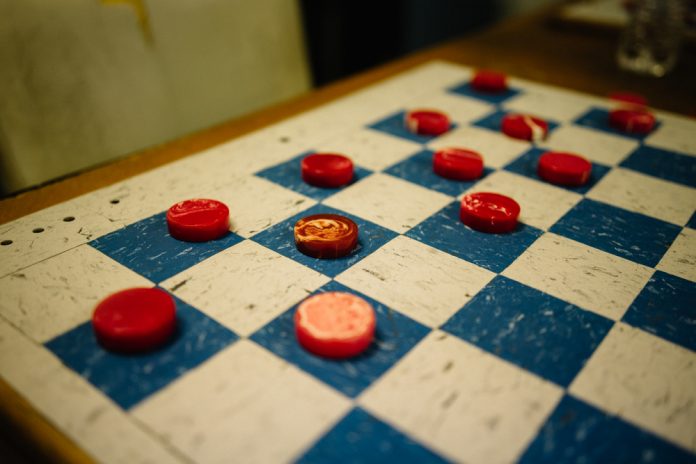 Stephannie Stokes for the Bitter Southerner on pool checkers

In a Vine City shotgun house, the dying art of pool checkers, a complex variation of the popular board game, still endures. Stokes introduces us to the obscure pastime:

The Georgia Pool Checkers Association in Vine City started with a larger movement to turn pool checkers into an organized game, like straight checkers and chess. Before then, players around the South and those who played in cities farther up the East Coast had little contact with each other, and often, as a result, the rules of pool checkers would change depending on your location.

The formation of a national organization, called the American Pool Checkers Association, in the mid-’60s standardized the game and gave players an opportunity to compete with each other in tournaments. To join, players in various cities started their own local chapters. The Atlanta club was the first.

The initial meeting place was just a garage on the same Vine City corner where the clubhouse is today. While the garage is no longer there, that’s where the checkerboards were set up when George “Concrete” Few started coming around.

Learning the game as a teenager, Few, now in his 80s, has a longer history with pool checkers than perhaps anyone else at the club. Today, glaucoma impairs Few’s ability to play competitively, but in his prime, he could easily hold his own. That’s when he earned his nickname, which is often the mark of a good player. He became “Concrete” because, as he says, “You got to be hard to play checkers.” Maybe it helped that he was also a brickmason.

In the town of North Wilkesboro, North Carolina, where jobs and dreams have disappeared, residents are distraught with the uncertainty of what lies ahead. Fausset, the Gray Lady’s Atlanta bureau chief, captures the mood from inside a local vape shop:

Kody Foster had finished his Wednesday afternoon shift at the warehouse where he earns $12.50 per hour. Normally, he would be packing himself into his Ford Focus, with its Bernie Sanders sticker and plaque with the number 48, in honor of the stock-car racer Jimmie Johnson. But this week, Mr. Foster, 26, couldn’t get the Ford’s check engine light to turn off, and the dealership told him that fixing it would cost $1,000, which he didn’t have. So instead, he borrowed his sister’s ancient red minivan, with its sliding door that doesn’t shut right.

He drove along River Road, the hillsides lush and tangled with kudzu, then up Main Street in this faltering Appalachian town, the largest in a county that has seen its factory jobs wither, its Nascar track shutter and its homegrown business — Lowe’s, the home-improvement chain — move its headquarters to a Charlotte suburb in 2003. Mr. Foster’s destination, wedged between a pizza parlor and the opioid addiction clinic, was the Tapering Vapor, a bare-bones e-cigarette shop and makeshift lounge that serves as his modest oasis, a place to catch a mild nicotine buzz and let a world of worry float away on banks of big, cloying, candy-flavored clouds.

In an America riddled with anxieties, the worries that Mr. Foster and his neighbors bring through the doors of the Tapering Vapor are common and potent: Fear that an honest, 40-hour working-class job can no longer pay the bills. Fear of a fraying social fabric. Fear that the country’s future might pale in comparison with its past.

Read: Feeling Let Down and Left Behind, With Little Hope for Better

As the new Atlanta Falcons stadium nears completion, English Avenue, Vine City, and other nearby neighborhoods are in the midst of a revitalization effort—the first seen there since the construction of the Georgia Dome in the early 1990s. Wheatley gives an overview of the changes afoot in Westside—as well as the accompanying concerns from the people who live there:

Mother Mamie Moore has a view of the world from her front porch on Oliver Street in English Avenue. The 77-year-old community activist can see her daughter Annie’s budding tomato plants and oregano. Next door is Lindsay Street Park, the neighborhood’s first green space. Every person walking by says hello to Mother Moore and she says hello to every person. But beyond the garden crops and green space are reminders of the stubborn challenges English Avenue, long known for its blight, drug market, and poverty, has faced for decades. A man bicycles by with a kitchen sponge for a bike seat. A car with out-of-county plates rolls past. The house across the street is dilapidated. So is the house next door. Moore, who serves as president of the English Avenue Neighborhood Association, does not want to look at those houses across the street forever. But she doesn’t want them knocked down, either. She’s more concerned about the people inside.

“I want to be able to empower and enable the person living in that house to enjoy something better,” she says. “Therein lies the challenge. What can we do?”

It’s a heady time in English Avenue, Vine City, and other Westside neighborhoods. When the new Atlanta Falcons stadium crashed down on two historic black churches in 2014, it unleashed a tidal wave of money and good intentions from city officials, CEOs, and philanthropic leaders who want to help people live in healthy and vibrant neighborhoods. They say they hope the efforts can create stability and community that can somehow, someway undo decades of disinvestment, poverty, crime, and blight in the area. Investors are swarming to purchase land, joining a motley crowd of property owners that range from mom-and-pop operations to overseas groups. City officials are buying and demolishing eyesores. The Nation of Islam has set up shop on a main drag and called on 10,000 followers to rebuild the community. Signs in yards urge people to “Unite or Die.” And some residents are mobilizing to make sure that the better future everyone is envisioning includes them.

Atlanta is one of the toughest places for undocumented immigrants to seek protection against deportation. Foley explores why that’s the case:

Immigration law doesn’t vary from state to state or court to court. But immigrants’ odds do, and by the numbers, Atlanta is one of the worst places in the country to be an undocumented immigrant hoping to avoid deportation. Justice Department-appointed judges in that court denied asylum 98 percent of the time in the 2015 fiscal year, the highest rate of any immigration court that heard more than five cases. Eighty-eight percent of cases that went before Atlanta immigration courts ended with a removal order. That’s way over the national average: In the country as a whole, immigration judges denied about 52 percent of asylum claims, and 69 percent of cases resulted in a deportation order.

ICE is set to ramp up its raids in coming months on Central Americans who came to the U.S. in or after a 2014 surge in border apprehensions of mothers and children. Officials won’t say where they’ll focus their efforts, other than that they will target people who were already denied asylum or other deportation relief in the courts. In Atlanta, that’s almost everyone.

Read: Here’s Why Atlanta Is One Of The Worst Places To Be An Undocumented Immigrant

Two of Atlanta’s iconic HBCUs, Spelman and Morehouse, have come under fire this year over their handlings of sexual assault cases. In one alleged incident, Meyerson examines how neither the accuser nor the accused found justice:

That walk to the dorm room is the last happy memory Synclaire has of her freshman year. Later that night, she filed a sexual assault claim at Spelman. Since then, Synclaire says, she’s been met with a stunning display of intransigence, victim-blaming, and hostility from authorities at both colleges.

Synclaire’s story offers insight into the epidemic of sexual assault on campus, and how ill-prepared many colleges and universities are to deal with it. It’s a problem that becomes exacerbated on the campuses of historically black schools like Spelman and Morehouse, where the South’s history of racist accusations of rape against black men complicates the path to justice.

“It felt like the administration didn’t care about me,” Synclaire said, “and that was really hurtful because it’s like, that’s your job to care.”

Both Synclaire and the man she says raped her, who was also interviewed for this article, say they felt failed by their colleges after the alleged assault. He maintains it was consensual.

Read: She went to a historically black college. So did he. Their sexual assault case was a disaster.