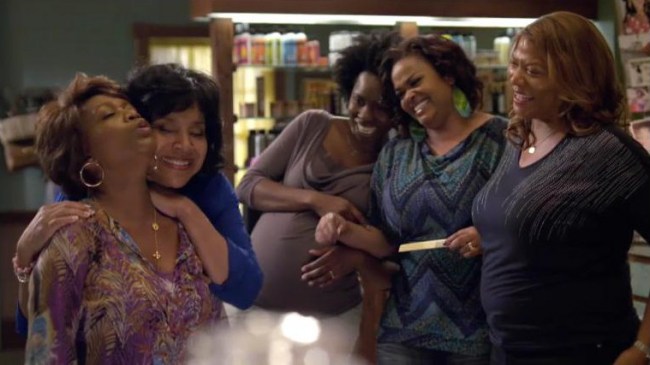 Atlanta director Kenny Leon‘s legion of local fans won’t have to wait until Sunday, October 7 at 9 p.m. to watch his remake of “Steel Magnolias” on Lifetime. The modern adaptation of the 1989 mother of all chick flicks will have its Atlanta premiere on Friday, October 5 at 7 p.m. in the Georgia Pacific Auditorium downtown as a benefit for Leon’s 10-year-old True Colors Theatre. For his fresh take on the classic story of the loose-lipped Louisiana ladies of Truvy’s Beauty Spot, Leon and producers Neil Meron and Craig Zadan (“Chicago,” “Hairspray and NBC’s Broadway-set  musical drama “Smash”) opted to cast women of color to play the roles previously occupied by Sally Field, Shirley MacLaine, Dolly Parton and Julia Roberts in one of her first big roles. This time out, the all-star cast consists of Queen Latifah (who also serves as an executive producer), longtime Leon pal Phylicia Rashad, Alfrie Woodard and Jill Scott, along with Rashad’s real-life actor daughter Condola Rashad, who plays the diabetic Shelby. The project was shot in Atlanta last spring.

In addition to a private viewing with Leon and a VIP cocktail reception, the evening also features a post-screening Q&A with the director and the film’s Atlanta cast members. Tickets range from $150 per person to $250 per couple, to a $1,000 10th anniversary season package including tickets to the screening and seats to all of True Colors productions this season and a $5,000 presenting sponsor package where you score 10 tickets to the screening.

While Leon steered clear of changing the flick’s now-classic dialogue (Shelby still gets to observe, for example, “I’d rather have 30 minutes of wonderful than a lifetime of nothing special”), we hear one script tweak was made. Medically speaking, in 1989 it was far more dangerous for a diabetic to deliver a baby. With a nod to those medical advances, Shelby will now suffer a life-threatening kidney condition.

Let’s just hope hope her prognosis is as dire as Roberts’ was in the original or else Latifah won’t get to wail “Whhhhhhy?!” in M’Lynn’s now-classic graveyard scene and Rashad as Clairee won’t get to deposit Woodard as Ouiser in front of her and pronounce “Knock her block off!”

For tickets and more info, go to the True Colors benefit page on the theatre’s website.