This year, as the nation celebrates the bicentennial anniversary of Frederick Law Olmsted’s birth, the New York Times declared that “his creations are more essential to modern American life than ever.” Widely recognized as the father of landscape architecture, Olmsted is best known for designing landmarks like Central Park, the U.S. Capitol grounds, and Biltmore Estate. Flouting Victorian conventions, he eschewed decorative plantings and created landscapes that amplify natural beauty. In Atlanta, he designed a series of six linear parks along “Ponce de Leon Parkway” for the new residential development of Druid Hills. With names like Springdale and Dellwood, the parks are named after natural features except for Virgilee, which is a memorial to developer Joel Hurt’s daughter. Olmsted—a native of Connecticut who began his career as an author and reporter for the NYT, covering and opposing slavery in the South—wrote copiously about designing public grounds. Here are five reasons why his parks, including the chain of greenspaces in Atlanta, seem especially relevant today:

1. Common Ground
Until Olmsted completed Central Park in 1858, most gardens and parks were privately owned. A social reformer, he devoted his career to creating outdoor spaces accessible for all people. In today’s increasingly divisive political climate, public parks offer rare places where we can literally, as the NYT pointed out, find common ground.

2. Tranquility
Olmsted viewed nature as an antidote to the artificiality and stress of urban life. His landscapes were designed not to draw attention but to subtly encourage visitors to relax and wander through.

3. Health
The pandemic has made us all covet the safety of fresh air, but spending time outdoors encourages mental health as well as physical, as Olmsted recognized.

4. Affordability
Atlantans have become increasingly concerned about economic disparities in our city. Olmsted wrote, “It is one great purpose of the Park to supply to the hundreds of thousands of tired workers, who have no opportunity to spend their summers in the country, a specimen of God’s handiwork that shall be to them, inexpensively, what a month of two in the White Mountains or the Adirondacks is.” 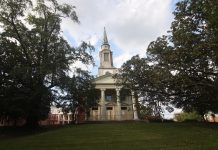