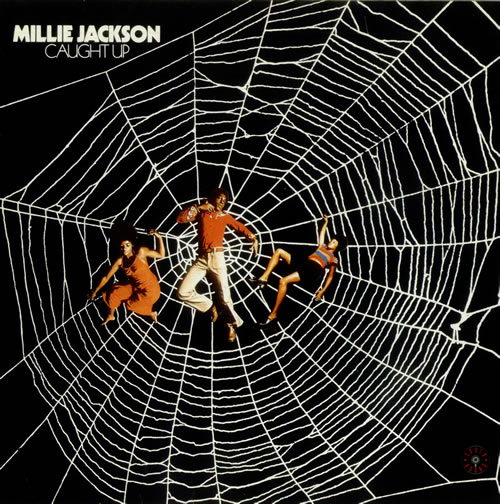 The album cover consisted of a sticky spider web entangling two dazed women and their confused man. The salacious image told listeners everything they needed to know about Caught Up, R&B singer Millie Jackson’s epic 1974 “soul opera.” The only thing more shocking than dropping the needle on Side One to hear a collection of songs from the perspective of the “other woman”: Flipping the 12-inch piece of vinyl to discover Side Two and songs from “the wife.”

Down in Muscle Shoals, Alabama, Jackson, along with producer Brad Shapiro and house band the Muscle Shoals Swampers, had accidentally created a classic that would land the Thomson, Georgia, native the highest charting album of her career and a Grammy nomination.

More importantly, the album’s steamy social commentary on sex, marriage, and family forever distinguished Jackson’s voice, previously often confused with that of fellow Georgia native, Gladys Knight. While Knight sang about hopping a midnight train to reunite with a lover, Jackson was more prone to pushing you in front of one if you wronged her. Lyrically, at least. Caught Up would also solidify Jackson’s life-long image as R&B’s bawdy Godmother of Rap and transform the topic of infidelity into a very public, three-way conversation. By giving each woman a say, Jackson created a flesh-and-blood portrait of a love triangle.

The singer, who turns 70 today, lives south of the city near Hartsfield-Jackson International Airport. I caught up with her to discuss the album’s impact.

“These were conversations that women had with each other at the Laundromat,” explained Jackson. “You didn’t hear them on records. You especially didn’t hear them on the radio. None of it was planned. At the start, the idea was to try and capture my live act on record, and I performed ‘If Loving You Is Wrong (I Don’t Want to Be Right)’ in my act. But when we got in the studio, the vibe was, ‘Just do it.’ What came up, came out.”

Sung from the unapologetic viewpoint of the other woman and written by the Stax Records songwriting team of Homer Banks, Raymond Jackson and Carl Hampton, the song opens Caught Up. But four minutes into the tune, with Jimmy Johnson’s wah wah guitar, David Hood’s slinky bass, and Barry Beckett’s wailing organ providing an inspirational groove, Jackson began talking: “When you’re going with a married man, he can come over two or three times a week and give you a little bit. That means you’re two up on the wife because after you’re married, you only gonna get it once a week. On payday, he can come over and give you a little bread too, and I like that. But the sweetest thing about the whole situation? When you go to the Laundromat, you don’t have to wash nobody’s funky drawers but your own!” The three-part opus enveloped most of Side One.

“You have to realize that in 1974, songs on the radio clocked in right around two minutes and 50 seconds,” Jackson explained. “ ‘If Loving You is Wrong’ clocked in at nine minutes! But we knew we were onto something. Then somebody in the studio asked, ‘What now?’ and I said, ‘We finish the story. We’ve heard from the girlfriend, but what about the wife? If the other woman has a say-so, so should the wife.’ It was about equality. It wasn’t about taking sides or making judgments. I did it out of fairness.”

The wife’s point of view opens with “It’s All Over But the Shouting,” a gritty declaration of war co-written by Jackson: “You’re telling me you’ve found a new love but we must stay together for the sake of our child? Now I‘m supposed to feel for your fatherly instincts when you’ve been practicing baby making all the while? No, no no! It’s all over but the shouting. And the shouting’s gonna be deafening.”

“Most of the time in my personal life, I was the other woman,” Jackson explained. “But I also felt the need to give the wife a say-so. Women loved it. I was speaking to them. I was the poor people’s queen. I didn’t sell records to bougies. It was the poor people who bought my music. The women who bought Diana Ross did not buy Millie Jackson. The people in the projects understood me. I was down and dirty. I told you like it was.”

When Jackson and Shapiro brought the finished concept album to Spring Records’ New York offices, they hit a sizable snag. “The record company told us, ‘It’s gorgeous, it’s wonderful, but who in the hell is gonna play it? They never had a project before where one song flowed into the next. And the songs were too long for radio,” Jackson said.

Then the perplexed record executives played Caught Up for pioneering New York urban radio programmer Frankie Crocker. “He listened to the entire album,” Jackson remembers with a throaty laugh. “When he finished, the Spring Records folks asked him, ‘Do you have any suggestions?’ Frankie said, ‘Sure. This is coming with me!’ He took the acetate with him and started playing it on WBLS. He ran off with the only copy of the album that had been pressed up too!”

Jackson knew she had a hit on her hands when she bumped into a Polydor sales rep in the street a week after Caught Up was released. “He told me, ‘You must be pretty happy.’ I asked, ‘About what?’ He told me, ‘Yesterday alone we sold 62,000 copies of Caught Up.’ I needed a minute to catch my breath.”

At its peak, Caught Up got to number 4 on the Billboard R&B Album Chart and 21 on the pop album chart. The record got so big, it crossed over to mainstream radio. While Caught Up crossed over, the ground-breaking project failed to ensnare one demographic for Jackson. “Men didn’t want my records in their house,” she says. “They wouldn’t come to see me live. Because I spoke truth to women, I got a reputation for being rough on men.”

In 1975, the album inspired a sequel, Still Caught Up with the wife getting the opening side and the album ending with the other woman screeching and getting carted off to a psychiatric ward. That woman wasn’t detained long. “She got Free and in Love, which was the title of my next album. A little while later, she was Feelin’ Bitchy, too!” said Jackson. “Like most songs about love and love triangles, the story just goes on and on. Kinda like life, right?”