Home News & Opinion The Clermont Hotel sign is for sale on eBay? Maybe?

Yesterday, a curious Craigslist post began making the rounds on Atlanta social media—someone posted photos of what they claimed was the original “Clermont Hotel” sign that once sat perched atop the more iconic, neon “Motor Hotel” sign.

“This is the actual sign that came off of the legendary Clermont hotel,” the post read. “It’s a 9-foot-long box sign, lighted, double-sided. Very heavy, you’re going to definitely need a truck or a van to pick it up.” The poster listed a price of $400 dollars or said they were willing to “trade it for something interesting.”

The listing quickly spread, sparking a conversation on the Atlanta Reddit page. One commenter who said they reached out to the sign owner posted the response they received from the seller: “I’ve gotten over 120 responses about it. One guy even offered me $600 for it. I must have it priced too low. I just listed it on eBay, on a 7 day auction.” Sure enough, the eBay listing, at time of writing this article, was already up at nearly $1,600.

So is this actually a piece of the Clermont’s iconic sign? Maybe. We reached out to the seller (first to inquire about buying the sign) and later offered an interview; they declined our request. But if you’re looking for a quirky addition to your kitsch collection, it’s certainly a conversation piece, authentic or not. Just remember that nine feet is pretty darn massive.

Meanwhile, the Clermont Hotel itself is preparing for a highly anticipated reopening as a boutique hotel with completely renovated rooms and a new restaurant, Tiny Lou’s. The 1920s-era hotel had previously been closed since 2009, although its famous basement strip club remained an Atlanta tourist mainstay. In 2016, filmmaker Heather Hutson even released a short documentary on the hotel’s history and final residents—watch the trailer for that below: 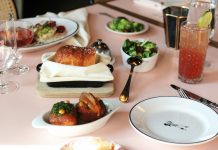