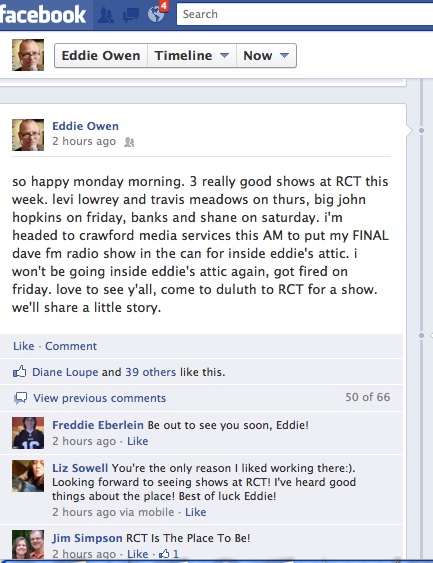 In a feature dedicated to his 20-year successful run at Eddie’s Attic in our current May 2012  issue, Eddie Owen told Atlanta magazine senior editor Tony Rehagen, “I don’t think I’ll ever leave the attic.” According to a post on Owen’s Facebook page Monday morning, those plans changed Friday night.

Posted Owens to his Facebook friends on his personal account: “I’m headed…this AM to put my FINAL Dave FM radio show in the can for ‘Inside Eddie’s Attic.’ I won’t be going inside Eddie’s Attic again, got fired on Friday night.”

By 10 a.m., 66 of Owen’s Facebook friends had posted comments on the development. “I’d like to fire whoever fired you!” wrote Susan Ray. “I’m plotting a community take-over!” Echoed Facebook friend Anthony Johnson: “Dude, you ARE Eddie’s Attic!! I’ll definitely be coming to visit you at RCT. You’d better believe it. I grew as a musician, songwriter and artist at Eddie’s.” Added Jonda Beattie: “I have no interest in Eddie’s Attic without Eddie Owen.”

Owen did not elaborate on what happened but in recent months he has been devoting attention to his OTP  concert series “Eddie Owen Presents” at the Red Clay Theatre in Duluth. In the past few months, Owen, the namesake but no longer the owner of the iconic Decatur acoustic music venue had stepped back in to assist current owners, longtime Atlanta concert promoter Alex Cooley and Dave Mattingly in running the operation. Likewise, Mattingly and Cooley invested in his Duluth concert series.

“This is news to me since it’s full speed ahead with the show as far as we’re concerned,” Dave FM program director Scott Jameson told us Monday morning. Jameson said he would have to speak with Owen and his CBS Radio bosses before he would speculate on the future of Owen’s popular folksy Sunday night program on Dave FM.

Owen opened the Attic in 1992 after helping to introduce the world to the Indigo Girls, Shawn Mullins and Kristian Bush at Trackside Tavern. At the Attic, he put doorman and future Grammy winner John Mayer on stage, gave Jennifer Nettles a regular paying gig and more recently booked the Civil Wars into the venue for one of the Grammy-winning act’s first live appearances.

We have interview requests into both Owen and Eddie’s Attic reps. Check back to Eldredge ATL for updates.