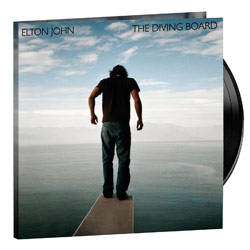 1. Elton isn’t Cher
Unlike Cher’s Autotune laced, dancefloor anthem choked new album, Closer to the Truth, the part-time Atlantan, now 66, isn’t trying to emulate the 67-year-old’s youth obsessed sound. Stripped down to piano, bass and drums, The Diving Board was inspired by Sir Elton’s first U.S. shows played 43 years at The Troubadour in Los Angeles. “I know I’m not going to get played on the radio,” John tells Grammy Museum director Bob Santelli in an interview shot for the Live From Capitol Studios DVD in the boxed set. “So, I had to ask ‘What kind of music do I really want to make?’ A lot of it was inspired by America, it’s a lot of Deep South and a lot of gospel influences. I wanted to make a record that I think befits a person of my age.”

2. Everything old is new again
Like his classic 1970s albums, Madman Across the Water and Goodbye Yellow Brick Road, fans can purchase The Diving Board as a gatefold two LP 180- gram vinyl edition. The warmth of the new analog recording on a vinyl pressing, paired with the spare instrumentation, highlighted by singer’s deepening, rich vocals and his ambitious piano playing (both his classical training and his love for Little Richard era early rock n roll are on ample display here) will have veteran fans recalling the days when they hand rolled those funny cigarettes across the fold out sleeve of Captain Fantastic and the Brown Dirt Cowboy.

3. This is Bernie Taupin’s best writing in years
From chronicling the life of blind slave pianist prodigy and Georgia native Blind Tom Wiggins to writer Oscar Wilde’s two-year stint in prison after being convicted of gross indecency (today, we refer to this “indecency” as being heterosexually challenged), Taupin’s lyrics are witty, engaging and even educational tales that encourage repeat listening. When he received the sets of lyrics for The Diving Board, even Taupin’s songwriting partner of 46 years was impressed. Says Sir Elton on the Capitol Studios DVD: “Bernie’s a very cinematic writer. He tells stories in his songs. As a lyric writer who hasn’t a clue how to write a lyric — I think I was responsible for Don’t Go Breaking My Heart for which I apologize — I get a piece of paper from him and it has a complete story on it. Then I sit down at the keyboard with the piece of paper and pray something comes out.”

4. It’s Elton up there on the high dive
Metaphorically speaking, of course (the actual shaggy haired model dude on the cover of The Diving Board shot by photographer Tim Barber isn’t identified). “I’m on the diving board,” the Peachtree Road homeowner explains. “I feel like I’m starting again, making records and trying to see how this one goes. Fear is a good thing. The Crocodile Rock days are over. I still play that song but I’m 66 now. I can’t make those songs anymore and I don’t want to. These days, I want to make really beautiful music. It’s a different era now.”