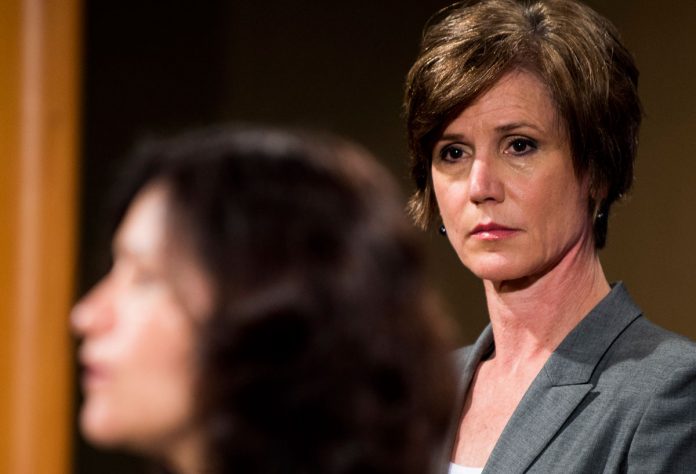 Called privileged resolutions, the pieces of legislation give state senators and representatives a chance to recognize, flatter, or console people who achieved notable deeds or just deserved a nod. And more often than not, their colleagues go right along with the nod of recognition.

That custom apparently flies out the window when the person being honored is Sally Yates, the federal prosecutor who lost her job as acting attorney general after refusing to enforce Trump’s controversial immigration order that sparked an explosion of protests at airports across the country and was successfully challenged in federal court.

Last week, state Sen. Elena Parent (D-Atlanta) introduced a privileged resolution honoring Yates, who lives in Atlanta and boasts an impressive resume as a prosecutor. Before serving as deputy attorney general during the Obama administration, Yates was the U.S. Attorney for the Northern District of Georgia. In that role, Yates prosecuted Olympic Park bomber Eric Rudolph and former Atlanta Mayor Bill Campbell, among other cases. There’s an argument to be made—a winnable argument—that the bar for Gold Dome recognition has been met.

Normally, the senator introducing the honoring resolutions might stand up and speak about the subject, then the resolution is adopted. But there was something about Parent’s resolution that got stuck in the craw of Lt. Gov. Casey Cagle (R-Gainesville). Parent’s resolution makes no mention of her defiance of Trump’s executive order, opting to highlight how the prosecutor “devoted her distinguished career toward the betterment of her state and country, as evidenced by her decades of putting service above partisanship.” But rather than allowing the resolution to be adopted, Cagle referred the legislation to the Senate Judiciary Committee—essentially sentencing it to die a quiet and lonely death.

According to a rundown of Senate privileged resolutions, Parent’s tribute to Yates (the two are neighbors, the senator says) is the only one this session that has been diverted (a resolution on plastic pollution was introduced on January 11 and withdrawn the next day). Considering that the Senate passes hundreds of resolutions each session, it’s a relatively rare occurrence. Last year, resolutions honoring a progressive think tank and a radio host (who was once a Democratic Party of Georgia staffer) were sidelined. And the closest we could find to an objection taking place on such clear partisan lines was in 2009 in the state House of Representatives, when then state Rep. Austin Scott (R-Tifton) protested Democrats’ paying homage to newly elected President Barack Obama.

We reached out to Adam Sweat, Cagle’s spokesman, but have yet to hear back. But there are plenty of potential reasons why the Senate indulged in what’s essentially the Georgia version of Mitch McConnell’s mansplaining. Yates’s stance on the Muslim ban elevated her overnight from a successful federal prosecutor to the posterchild of a courageous public servant working under Trump—and in some circles, a potential Democratic candidate for governor in 2018.

She also managed to irk many conservatives, no doubt some of the same state senators who pushed a privileged resolution in late January honoring Trump as someone who “has promoted a newfound sense of patriotism in this nation” and “has given inspiration to many through his integrity, vision, and leadership.” Democrats did not fight that resolution—something Parent noted when she took to the Senate well Friday morning to announce that she would push for a hearing.

“Instead of passing, this resolution has been referred to committee presumably to bury it forever,” Parent said. “I’m disappointed that this body is apparently choosing to play petty partisan politics with Ms. Yates’s distinguished legal career—especially as courts are finding and validating her reasoning so it clearly was not simply a political move with no basis in law . . . I would hope that this body also would not get caught up in such silly partisan posturing—especially when I very purposefully decided to not mention anything about that kerfuffle when offering this resolution so it was something we would all feel good about.”

Parent ended by saying she wants that hearing on the resolution. We’ll see if she gets it.