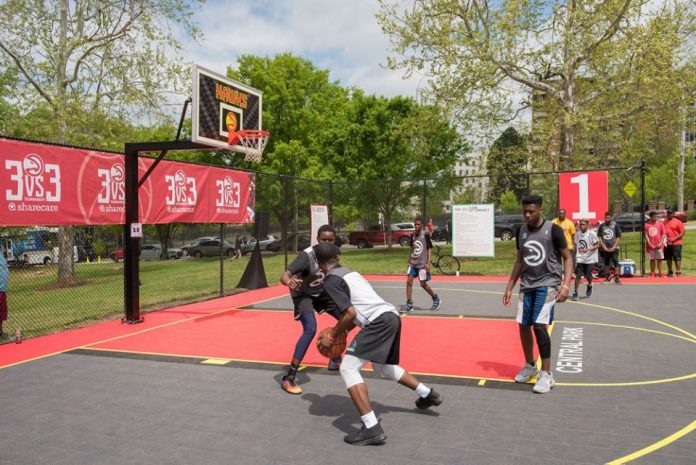 You may have noticed a new patch on the Atlanta Hawks jerseys this season—the Sharecare logo, representing the team’s partnership with the digital health company created by WebMD founder Jeff Arnold and Dr. Mehmet Oz (aka “Dr. Oz”). Sharecare aims to make people healthier by providing personalized tools, information, and resources that help them manage all their health in one place. As an Atlanta-based company, Sharecare took this commitment to the next level in 2017 when it launched the #SharecareMovement in partnership with the Hawks to put Atlanta and Georgia among the healthiest cities and states. With the Hawks’ ongoing efforts to improve the health of city residents, joining forces with the #SharecareMovement aligned perfectly with their interests in making our communities healthier.

The team is engaged in a variety of ways to promote healthier lifestyles, including renovating basketball courts, holding health-focused events around the city in partnership with Sharecare, and an alliance with Emory Healthcare to help improve access to top-tier medical care for all Atlantans.

“We want to help build a better Atlanta and ensure that everyone has access to play,” says David Lee, executive vice president of Atlanta Hawks External Affairs and executive director of the Atlanta Hawks Foundation.

After noticing a decrease in youth participation in basketball during the recession, the Atlanta Hawks Foundation initiated the Court Renovation Program. To date, the foundation has renovated or built 19 basketball courts as part of its commitment to providing 25 courts throughout Atlanta by 2020 for kids to have a safe place to play. So far, the Hawks have refurbished courts in Grant Park, Kirkwood, and College Park; at William Walker Rec Center in southwest Atlanta; and at Camp Twin Lakes, a camp for children with serious illnesses and disabilities. Gone are rusted rims and faded paint; instead, the new courts have brand-new hoops, nets, and backboards and have been completely resurfaced, with the Hawks logo at center court. More than one million Atlanta residents now have greater access to basketball.

Part of the foundation’s commitment to these courts is providing ongoing programs that benefit the local community, including Jr. Hawks summer camps and basketball tournaments. Additionally, joining with Vision to Learn, the Atlanta Hawks Foundation helps to bring better vision care to communities, including eye testing and free glasses for elementary students. The foundation has also facilitated discussions for teens, community leaders, and police at various court locations alongside presenters from Fearless Dialogues. screenings, yoga, fitness classes, and a 3-on-3 basketball tournament, where more than 400 participants from across the city played on the newly renovated courts.

“We created the #SharecareMovement to improve the health and wellbeing of Georgians and Atlantans,” says Dawn Whaley, Sharecare president. “To make an impact, we recognized the need to share care in our communities at the grassroots level, which the Atlanta Hawks are helping us do in a number of ways.”

The Hawks’ commitment to making Atlanta a healthier city extends to Hawks games and events such as the Atlanta Hawks Fast Break 5K, presented by Sharecare, which offers an incentive of earning $25 toward a game ticket just for signing up. Plus, when the 2018-19 basketball season begins, fans can expect new and delicious healthy food choices at the completely transformed Philips Arena, including locally sourced foods from Georgia Grown.

As a partner in the new 90,000-square-foot Emory Sports Medicine Complex in Brookhaven—which houses the Hawks’ practice and training facility, Emory Sports Medicine Center, and Emory Physical Therapy—the Hawks have been an integral part in bringing the most advanced technology in preventive and rehabilitative treatment and sports performance training to Atlanta. That includes housing the renowned P3, a facility dedicated to advanced sports science technologies for optimizing athlete performance.

But the state-of-the-art facility isn’t just for professional athletes; it is also open to the public.

“Any Atlanta resident with a sports or orthopedic injury can go where the players go and receive the same level of expertise and care,” says Scott D. Boden, professor of orthopedic surgery at the Emory University School of Medicine and director of the Emory Orthopedics & Spine Center.

Emory’s team of board certified sports medicine and sports cardiology specialists, as well as orthopedists, optometrists and other specialty areas, now serve as the official healthcare provider for Atlanta’s professional sports teams including the Hawks, Braves, Dream and Falcons. In addition, Emory Healthcare serves metro Atlanta residents and various metro high schools and colleges. All patients receive the same access to innovative technology and treatments.

Inherent in the Hawks’ mission to “entertain and unite the city” is a commitment to serve as a community asset to their fans and neighbors. “We believe that along with our partners, all of our efforts contribute to healthier outcomes for all of Atlanta,” says Lee.