Georgia’s jam-packed redistricting session is over, but the fight over the new maps is just getting started. Governor Brian Kemp signed the three new legislative maps into law on December 31st, triggering several lawsuits that argue the new districts discriminate against minority voters. Here’s a round-up of the new maps, the lawsuits challenging them, and what it all means for the looming 2022 midterms.

The Process
Redistricting takes place every ten years. After U.S. Census data is released, the district lines for the Georgia State House, State Senate, and U.S. House of Representatives must be redrawn to ensure each district has the same number of voters.

The process is thoroughly political: in some states, independent commissions draw the maps, but in Georgia—as in most states—it’s the job of the state legislature. That means redistricting is effectively controlled by the majority party, which often draws the maps unfairly in their favor, a technique known as gerrymandering. Both parties have been guilty of gerrymandering in states they control: in 2001, Georgia Democrats, trying to protect their dwindling majority, redrew district lines into such tortured shapes that the 13th Congressional seat became known as the “dead cat district.”

These days, Republicans control the state government and the governorship, and though they maintained the process was fair, critics have said the resulting maps unfairly benefit the GOP. Assembly Democrats, voting rights advocates, and watchdog groups argued the new maps dilute the power of minority voters, and said they don’t accurately reflect Georgia’s status as a swing-state. Assembly Republicans rejected those accusations, defending the fairness of the new maps and arguing that redistricting is always a “large, complicated puzzle.” 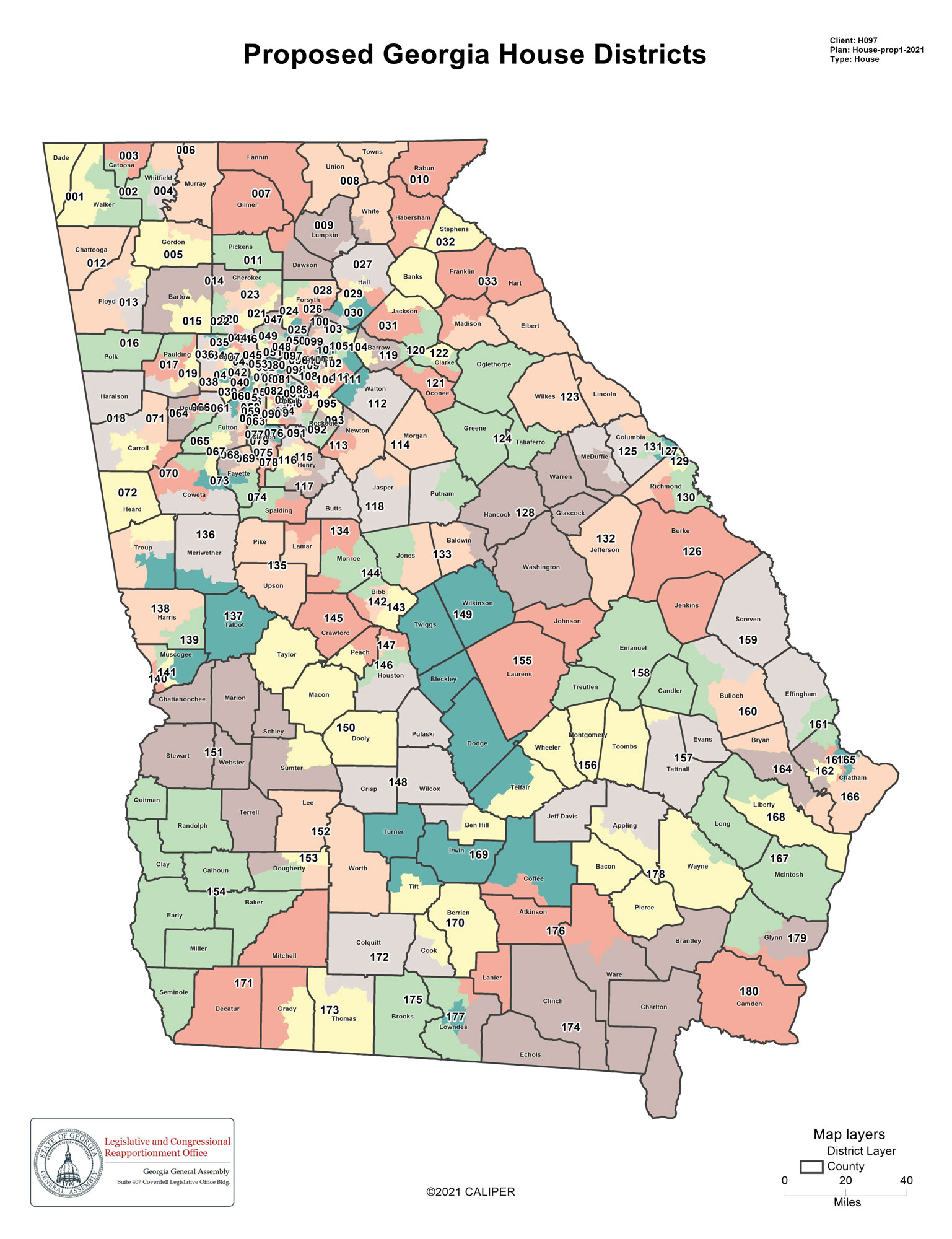 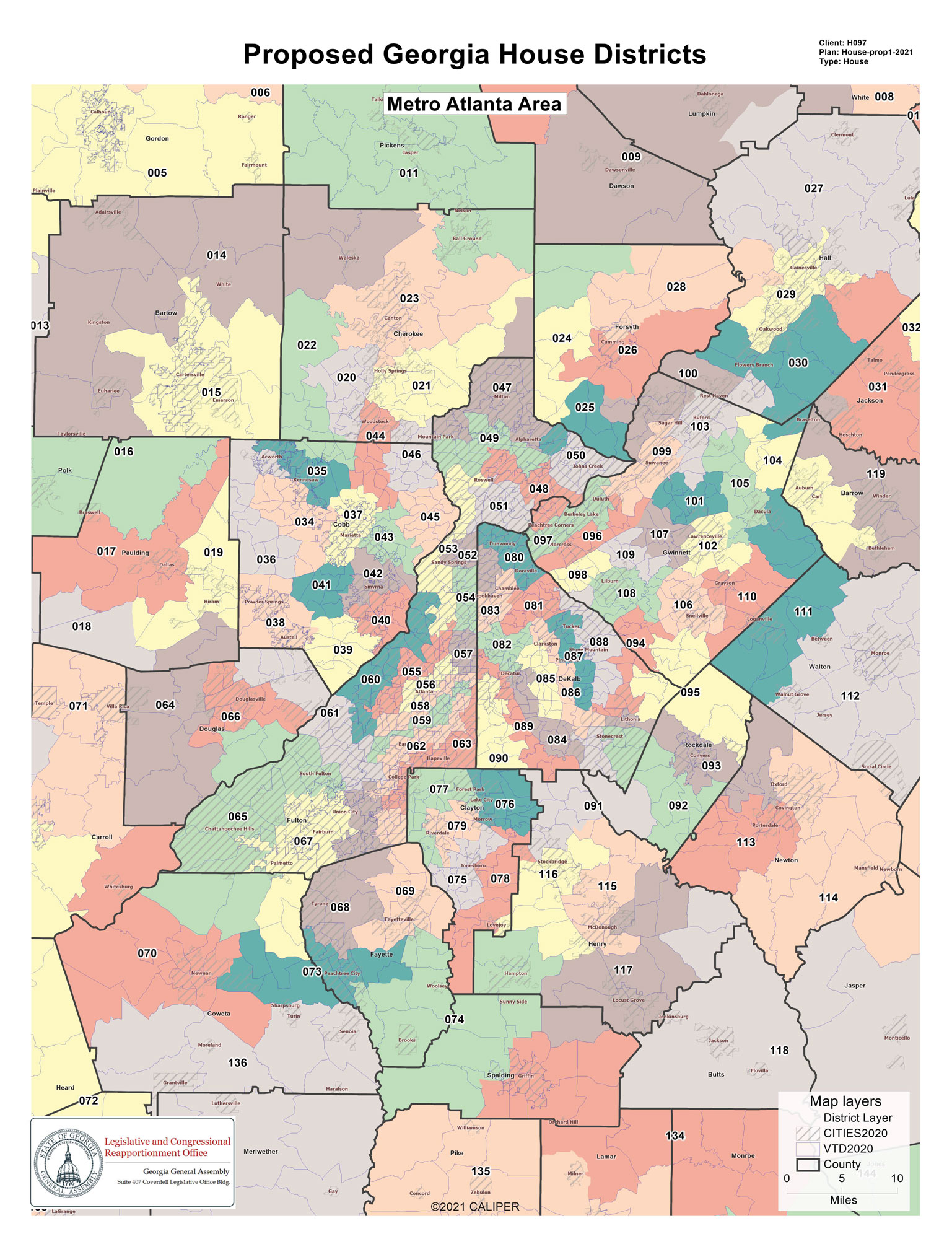 The final map is an amended version of the original proposed by the House redistricting committee, which passed the House on a nearly party-line vote of 99 to 79. Though Republicans protected their majority in the chamber, analysis by the Atlanta Journal-Constitution found that the new map makes some concessions to shifting demographics: the House is currently split between 103 Republicans and 77 Democrats, but in 2022, elections under this new map will likely produce a split of 97 Republicans and 83 Democrats.

Of the three maps, experts say the state House map is the least gerrymandered to favor Republicans. “Statistically, this map isn’t bad,” said Ken Lawler, chairman of Fair Districts Georgia, a nonpartisan group that advocates for fair and transparent redistricting.

To assess how much the boundaries of any given map can be attributed to a majority party power grab, PGP’s computer scientists generate millions of possible maps, then plots them on a graph of favorability to either party. As Lawler explained, the millions of computer-generated maps form a bell-curve, with most maps hugging a political middle-ground; that makes it easy to see whether a map produced by a partisan committee is an outlier designed to unfairly benefit one party or the other. Princeton Gerrymandering Project, which uses those graphs to assign electoral maps a grade of fairness, gave the winning state House map a B.

But House Democrats have criticized the map, arguing that it dilutes the power of minority voters by dividing communities into separate districts, a gerrymandering technique known as cracking. (67 percent of House members are white, representing a statewide population that is 51.9 percent white.)

GOP legislators dismissed these allegations: “This (map) is a reflection of the growth in minority populations . . . and compliance with the Voting Rights Act,” Representative Chuck Efstration (R-Dacula) told the AJC. 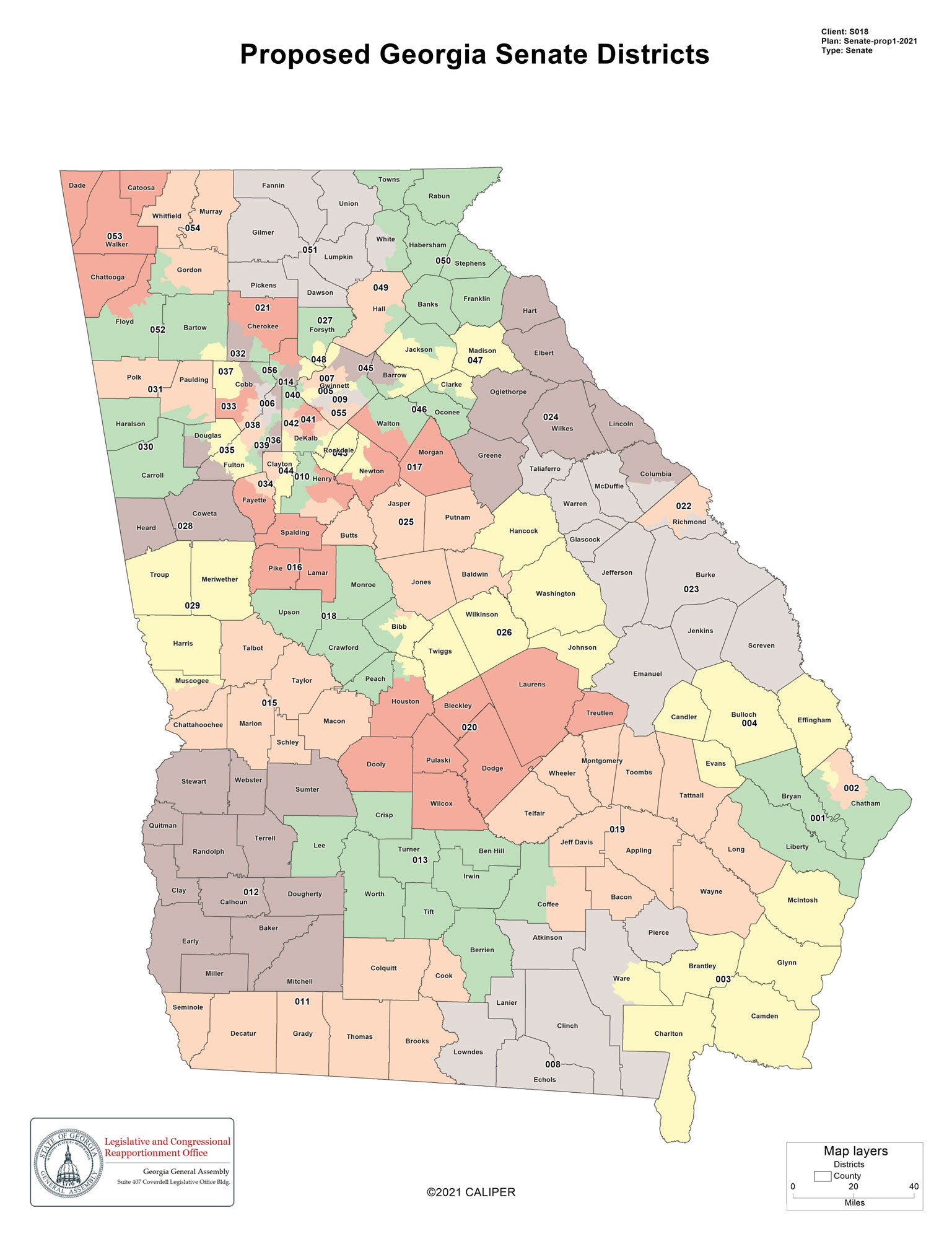 In sharp contrast, the state Senate’s new map, comprised of 56 districts, earned an F from the Princeton Gerrymandering Project. Of the three maps, it responds the least to Georgia’s demographic shifts. The current Senate is split between 33 Republicans and 22 Democrats, but the new map will likely only shift to a 33-23 balance, per Fair District Georgia’s analysis.

According to Fair District Georgia’s analysis, only one district will actually remain competitive for both parties—the 48th in Gwinnett. “Over 99.5 percent of the million maps [generated] were more fair than the map we got,” Lawler said. “That’s a clear indicator that it was engineered” to benefit Republicans, he added.

Last month, Senator John Kennedy (R-Macon), chair of the Senate redistricting committee, defended the map, calling it a “recognition of the trends and changes that we’re all seeing in politics.”

Senate Democrats and nonpartisan analysts disagree. U.S. Census data shows that Georgia gained a million new residents in the past decade, most of them people of color who settled in urban areas. The new maps should reflect those demographic shifts, critics say, by creating more districts with a large share of minority voters.

In some new Senate districts, minority representation actually decreased. District 48, for instance, which covers Johns Creek and is currently held by Michelle Au—a Democrat and the only Asian-American woman in the state Senate—lost its minority-majority status. Prior to redistricting, her district’s voting-age population was 60 percent non-white; by drawing the district further north and pulling in parts of Forsyth County, legislators made the district majority-white and much more favorable for Republicans.

“We looked at it really hard to see if there was a path to defend that seat,” Au told Atlanta. “But obviously the way they drew it, and the intent with which they drew it—it was for a reason.” She said she plans to run for a House seat instead, adding that she thinks Republicans’ strategy won’t work forever. “They can try to stave off the inevitable,” she said. “But we’ll see this change through and be here when this area flips again.” 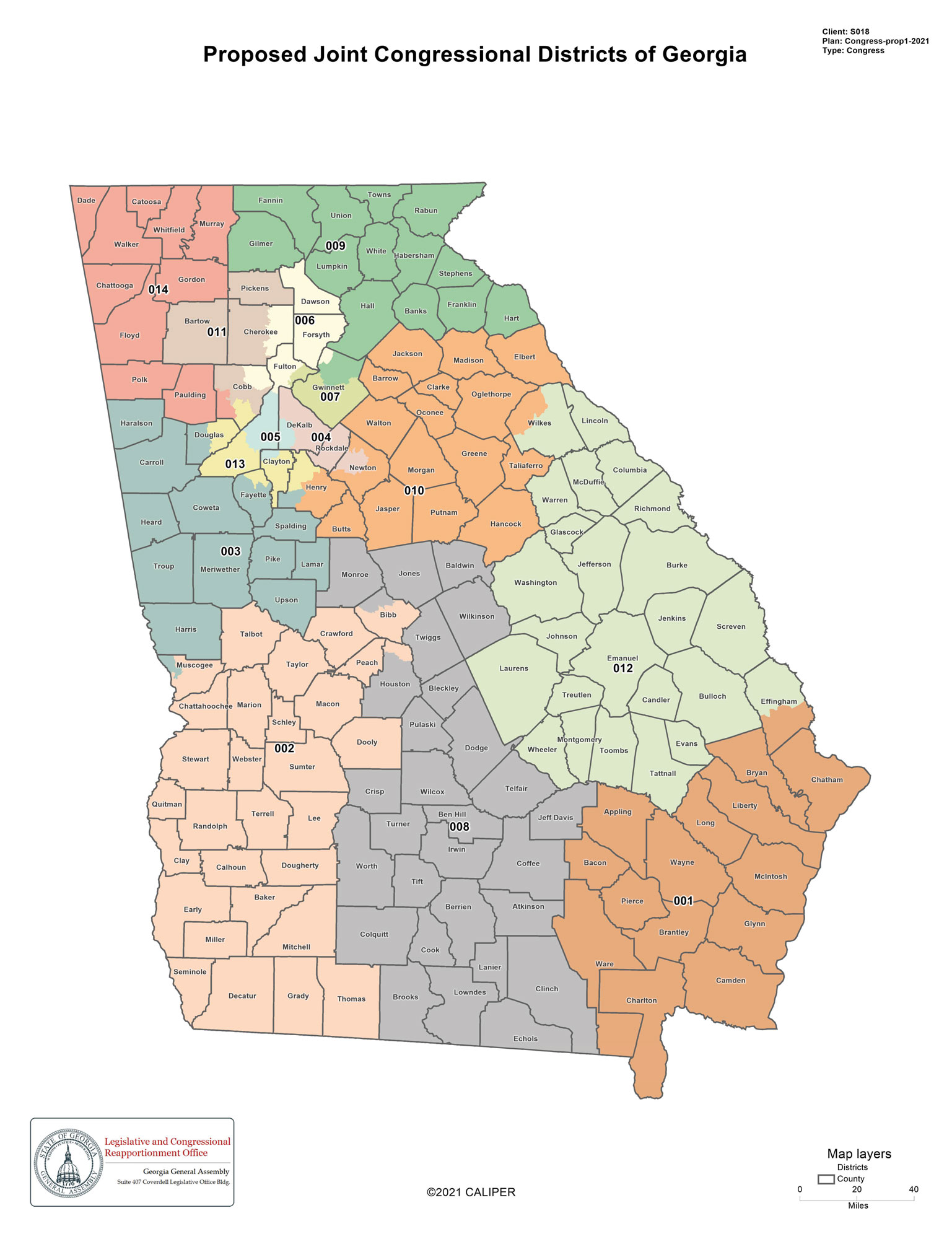 Though Georgia’s population surged over the last decade, it wasn’t enough to earn the state a new seat in the U.S. House of Representatives, so legislators divvied up the same 14 seats for the new Congressional map. The current configuration is split between 8 Republicans and 6 Democrats. The new map—which earned a C from the Partisan Gerrymandering Project— will likely swing 9-5, with no competitive districts.

The 6th District, a swath of north Atlanta that’s been hotly contested for years, now leans strongly Republican. Formerly a conservative stronghold, the district made national headlines in 2018 when Democratic Representative Lucy McBath beat out Republican Karen Handel, and again in 2020 when McBath held onto it in a tight rematch.

The new Congressional map adds all of Forsyth County to the 6th District’s boundaries, deep-red territory that analysts say would greatly diminish McBath’s chances of keeping it in 2022. McBath has announced she’ll run next door in the 7th instead, a former swing district that is now safely blue after redistricting. She’ll face a primary fight there first: the seat’s current representative, Democrat Carolyn Bourdeaux, plans to run as well.

Another district drawing attention is the 14th in northwest Georgia, held by Republican Marjorie Taylor Greene, a self-styled political maverick whose penchant for spreading misinformation has unnerved some establishment Republicans. Her district now stretches from down to the Atlanta suburbs, even looping in—to their horror–a few Democratic strongholds in West Cobb County.

It’s too soon to say what those changes will augur for Greene’s prospects, but it certainly opens the door to a Republican primary challenger who could court more moderate voters. Greene herself bashed the redraw, calling it a “fool’s errand. . . led by power-obsessed state legislators.”

The Lawsuits
Governor Kemp signed the maps into law on December 31, and lawsuits challenging them followed swiftly. Kemp signed the law on the last possible day, which effectively limits the length of time lawsuits can move through the courts before 2022 elections begin.

To date, five lawsuits have been filed, led by various civil liberties and voting rights advocacy groups, including the ACLU, the Georgia NAACP, and the Southern Poverty Law Center. Attorney Marc Elias, who has spearheaded voting rights litigation in states across the country, has filed two lawsuits on behalf of individual Georgians, claiming the new maps violate their constitutional rights.

The various lawsuits (which were all filed in federal court) target different maps—or certain districts within the new maps—but they all make a similar argument: the Republican-led redistricting process created gerrymandered maps, diluting the voting power of minority groups. In a statement accompanying their lawsuit, the ACLU’s Sophia Lin Lakin announced, “These newly drawn maps are a brazen attempt by Georgia politicians to undermine the political power of Black voters.”

Since the Supreme Court nixed the preclearance requirement of the Voting Rights Act back in 2013, Georgia’s new maps don’t have to wait for approval from the Justice Department: they’re already in effect. The 2022 elections will be held using these newly drawn districts, unless a judge in one of the lawsuits issues an injunction to halt one or more of the maps. Lawyers for the state of Georgia, defending the new maps, say that’s not likely, but hearings are expected in the coming months, which will shed more light on how the new maps will impact upcoming elections.