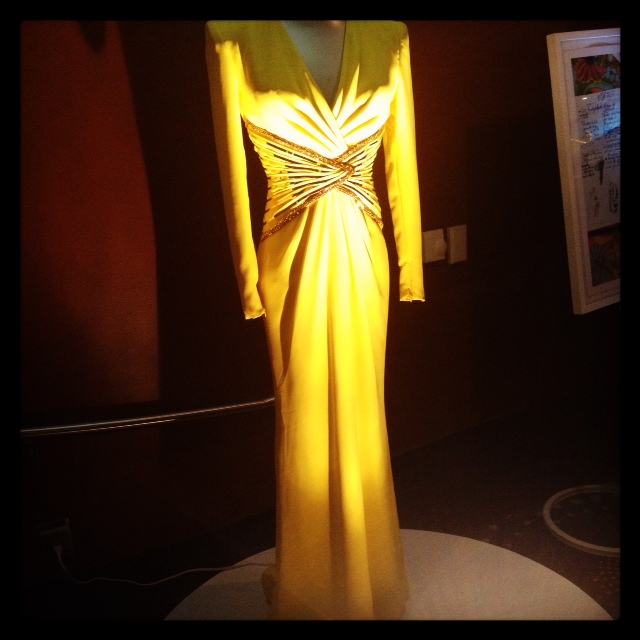 Just like those rare collectibles on eBay, Jane Fonda’s canary yellow 2013 Oscars dress, personally created for her by designer Donatella Versace on display Thursday night, had a Buy It Now price for the time-crunched consumer: $50,000. The dress served as the eye-catching silent auction centerpiece at the annual EmPower Party benefit for the Fonda-founded Georgia Campaign for Adolescent Power & Potential at the Georgia Aquarium downtown.

Like the Oscars dress, G-CAPP had plenty of high-end live auction items to inspire lively bidding as well while raising funds for G-CAPP’s advanced mission of combating childhood obesity and the nonprofit’s new adolescent healthy relationships initiative, along with its continued dedication to reducing teen pregnancies in the state. A Hollywood night on the town with Fonda went for $11,000 as did two seats to the 2014 American Film Institute ceremony when the two-time Oscar winner will be presented with the coveted 42nd AFI Life Achievement Award on June 5 (Fonda found out she was to be presented with the award Thursday afternoon and immediately turned the opportunity into an auction item).

The actress/activist’s “favorite ex-husband” and CNN founder Ted Turner, sitting at a front table with his children, had donated five-day stay at his New Mexican Armendaris Ranch and Sierra Grande Lodge and Spa to G-CAPP for the first time as well. The 362,885-acre ranch sports, among other things, one of the largest bat caves in the world. Enticed Fonda as spirited bidding commenced: “At sunset, you’ll see a black funnel of bats emerge from the cave as they eat tons and tons of insects. Hawks pluck them out of the air like hors d’oeuvres. It’s truly one of the wonders of the world to see.” The vacation went for $12,500.

The evening’s honoree was CNN’s Emmy-winning chief medical correspondent Dr. Sanjay Gupta, who was presented with G-CAPP’s Health Pioneer Award before settling into a white chair on stage across from Fonda (who, for the record, was completely rocking a pair of tight black jeans and matching boots) for a wide-ranging interview with her. As Fonda discussed G-CAPP’s plans to combat food deserts in Atlanta’s fast food emporium-clogged Vine City neighborhood with community gardens in 2014, Gupta told her, “We’ve got to find ways to make healthy food cheaper and [fast food] sin taxes won’t help.”

Fonda concluded the interview by inquiring about the lasting effects of Gupta’s eye-opening 2011 work in famine-ravaged Somalia for his CNN series Crisis in Somalia: Dr. Gupta Reports. Notably, Gupta and his team interviewed a family with three ill children who walked for over a month to reach a refugee camp, only to be robbed upon their arrival. Asked Fonda: “Do you feel like you have Post-Traumatic Stress Disorder?” The father of three replied, “I think I do have a component of PTSD. It’s tough to talk about.” His voice breaking, Gupta took a moment and added: “Seeing hundreds of thousands of children who were without food… it does stick with you.”