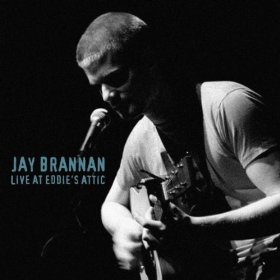 Like the “Caution: HOT!” warning label on styrofoam McDonald’s coffee cups, there’s a reason New York singer-songwriter Jay Brannan has posted an explicit message to fans on his official website. In part, it reads: “PLEASE DO NOT SEND OR DELIVER ANYTHING TO MY HOME. I will not open, read, consume or keep any unsolicited mail or deliveries from people I don’t know.”

Turns out, when the 30-year-old singer penned these lyrics to “At First Sight,” he was only sort of kidding: “You like the guy on your iPod, not the guy in your bed. After the fan mail, came anthrax. Now you wish I were dead.”

“Fans were dropping things off at the front desk of the building where I live,” Brannan explains laughing. “It got a little weird. I think it’s incredibly sweet but would you eat baked goods dropped off by a complete stranger? I appreciate the thought but I’m not going to eat it. You never know. It could be a muffin basket from Focus on the Family.”

Just this week, a well-intentioned fan shared a YouTube video of himself, naked with an acoustic guitar, performing his original tune, “Nobody Does It Like Jay Brannan” on the singer’s Facebook fan page for Brannan’s 51,000 followers to see. And when the candy-jonesing singer posted a late-night, post-show poll on the page about whether he should consume a stray Lemonhead from the floor of his hotel room, 194 fans weighed in on the dilemma.

But it’s that wry, world-weary relatability Brannan has established with fans over the years (initially shared via the singer’s decidedly low-fi YouTube videos performing his lovelorn acoustic originals in his cramped New York apartment) that inspired fans across the globe to bake and send Snickerdoodles.

Brannan beautifully captures that audience/artist bond on his brand-new concert recording, “Live at Eddie’s Attic,” chronicling two engagements at the famed Decatur acoustic club in 2010 and 2011. After the songwriter’s stint there in the fall of 2010, Eddie’s acolyte John Mayer surprised audience members with an unscheduled late-night Tweet up show at the club (“Instead of John Mayer’s opening act, I tell people he was my after-party!” cracks Brannan).

The singer returns to Eddie’s this Saturday and Sunday night to celebrate the album’s release on iTunes with his local fans as part of the performer’s most-extensive-yet world tour in support of his new studio project, “Rob Me Blind,” produced by David Kahne (who also twisted the knobs on Regina Spektor’s “Begin to Hope” album).

“People had been asking me for a live album for a really, really long time,” he explains. “Eddie’s Attic is one of my favorite places to play. I love that room and the sound you get in there. It’s a great venue for what I do which is this kind of intimate, casual singer-songwriter thing. I ended up with a CD of one gig there and I listened to it in my rental car on the way to my next show in Nashville. I remember thinking, ‘Wow, this recording is really good!’ Which is weird for me. Usually, I think I sound terrible and going back to listen to myself perform is just painful! But thankfully, live is a really forgiving format.”

During the live set, the Texas-born singer zeroed in on his Southern audience, referencing 2011’s Second Coming no-show that was being prognosticated by some Christians.

“How was your rapture, by the way?” Brannan inquires while tuning his guitar on the recording. “Funny, I was expecting Atlanta to be much emptier this time around. Guess you weren’t as ready as you thought, huh?” The singer then launches into a hilarious cover of hip-hop queen’s Nicki Minaj’s radio hit, “Super Bass” as the Eddie’s audience wildly applauds its approval.

He kicked off the set with a stripped down rendition of “The Spanglish Song” from “Rob Me Blind,” a song inspired by a bout of unrequited love during a vacation to Madrid. The song’s chorus sung by Brannan in Spanish is essentially a sexual proposition/marriage proposal before confessing to his crush, “How do I convey?/You make me want to put on a different T-shirt every day?”

“That’s a really big deal for me,” the singer says, laughing. “I’m not a big fashion person. I hate shopping. I usually throw on the same thing every day. Having a reason to change your T-shirt is huge for me.”

This weekend, Brannan says fans can expect him to change things up a bit for his Saturday and Sunday night shows at Eddie’s Attic, along with some brand-new originals and a few of his always unpredictable cover selections.

Previews Brannan: “I never really know what will happen live. That’s the fun of it for me and hopefully, for the audience too. But I’ll try to wear a different T-shirt each night!”

Jay Brannan plays Eddie’s Attic this Saturday and Sunday at 7:30 p.m. Go to EddiesAttic.com or Ticket Alternative for tickets or more info.