What’s The Point?
About six miles southwest of downtown, at the core of Cascade Heights’ commercial district, an adaptive reuse project on a small piece of arrow-shaped property hopes to have a big community impact. Developers say the Point At Cascade—a retail mix of existing and new businesses, spread across two buildings—will boost the area’s walkability and profile.

Background
The buildings have stood on Cascade Road since at least the 1950s, and the more prominent structure was once a Gulf gas station. Owner/developer and nearby resident Shea Embry bought the properties in 2016 with plans to invest about $1.5 million, largely on exterior improvements.

Tenant outlook
Embry says the 11 planned retail slots will range from 243 to potentially 4,300 square feet, where a restaurant will offer patio seating. She’s in talks with potential restaurant tenants but other signees include Buzz Coffee and Winehouse, the City of Atlanta design studio, an existing salon, a music studio, and a barbershop. 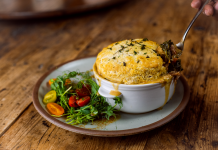