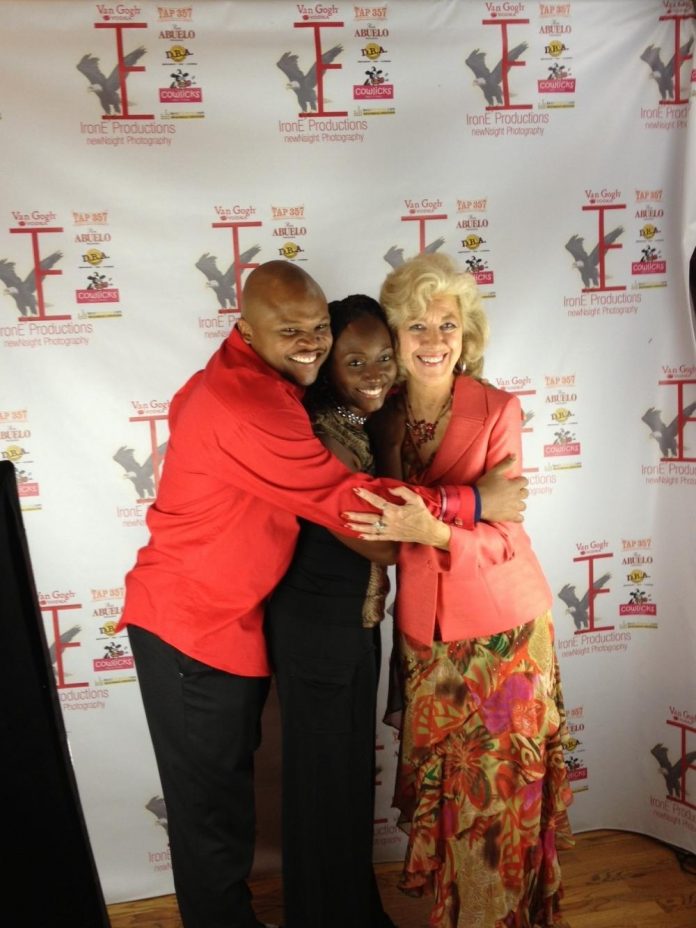 There were, perhaps, a few anxious moments Sunday night when the sun went down at actor IronE Singleton‘s beautiful lake side home in Paulding County when the guests at his “The Walking Dead” season three premiere viewing party noticed there are zero street lights in the area. And all the doors were open. Oh, and then Merle — remember the racist redneck who was last seen handcuffed to a downtown Atlanta roof  in season one? — yeah, well, he showed up.

So, it’s probably a good thing then that the zombie apocalypse was confined to the TV screens playing the hit AMC drama throughout the house and that Merle’s portrayer, actor Michael Rooker is, in actual life, a sweet man and a pal of Singleton’s. Rooker showed up to the party fresh from New York ComicCon where he was promoting Merle’s much-anticipated season three return (minus a hand and now enhanced with blades in place of digits). It was also comforting to the crowd (fearing that a stray walker could stumble into the gathering) that the man who plays T-Dog is so artful at driving a fireplace poker through the craniums of the undead.

In the front office of his home where “Rocky” DVDs mingle on a book shelf with a copy of Denzel Washington’s book “A Hand to Guide Me” and Washington’s film “American Gangster” along with a ” The Walking Dead” season two boxed set, Singleton talked to Atlanta magazine about the new season and this season’s new locales, a zombie-filled abandoned prison and the graphic novel’s pivotal city of Woodbury. “It’s so exciting,” Singleton says. “It’s new and different terrain for us. It’s something different from the farm. Last season, a lot of the action lovers were saying, ‘Why are we still on this farm? Let’s get away from this farm.’ So this season, when we get to the prison we’ve got a lot of non-stop action ready to go. I am so excited about this first episode. It is so ridiculously insane good! We’ve got quite a body count in this episode. Probably the highest body count on any episode so far.”

Of shooting on the new  prison set in Senoia, the actor says, “I’ve never been in prison but to me it looks like the real deal from what I’ve seen on television and in the movies. They did an amazing job with it. People will be really excited by what they get from T-Dog this season.” As for Merle’s return to the show, Singleton assesses, “As an actor, it’s fantastic because I get to work with a living legend. Michael Rooker is a great actor. But as a character, if I had nails, I’d be biting them right now! I mean, we’re talking about Merle here. He’s insane, he’s racist. I mean, he’s got blades for a hand now. T-Dog wants no part of Merle!”

Singleton adds: We’re three-quarters of the way into shooting this season.” We? So T-Dog is still alive three-quarters through the new season? Laughs Singleton: “Now that’s we as a collective and as a production team because we’re one big happy family. Not to give anything away, it could be we minus me! You just never know. You’re digging, aren’t you, Rich?”

Can’t blame a guy for trying.

Between bites of a pimento cheese stuffed deviled egg, Rooker happily posed for pictures with viewers (even playfully putting up his dukes with one fan) and supplied a recap of his experiences at New York ComicCon. After all, Merle’s return is the big surprise at the very end of the season three teaser trailer when Merle turns up as the Governor’s henchman in Woodbury. “It was completely wild, man!” Rooker recounted. “They almost talked me into coming out of a cake. The fans were yelling ‘T-Dog for president!’ so I yelled back, ‘Merle for Vice-President!'” And Rooker’s response when he got the call to return to duty for the new season? “I just thought to myself, ‘Wow, I can pay my mortgage.’ I’ll be there with bells on, are you kidding?!'”

As for Merle’s new hand/weapon of mass destruction, Rooker says he is loving his new prosthetic limb. “I don’t even take it off at lunch. I cut my meat with it!”

Guests at the party who screamed and/or winced when  — spoiler alert! — Rick hacks off Hershel’s leg to prevent a zombie infection in the season premiere included broadcasters Holly Firfer and Mara Davis and TruTV’s “Full Throttle Saloon” star and Jackyl lead singer Jesse James Dupree. We’re pleased to report that a copy of Atlanta magazine’s Hollywood of the South issue was proudly displayed on the actor’s glass coffee table too!

“I’m just so happy and grateful to see so many beautiful faces here this evening,” Singleton told his guests just before the episode started. “To  know that all of you love ‘The Walking Dead’ and T-Dog. This episode tonight could be the best episode of all time. Be prepared to have your shoes knocked and probably your socks too!”