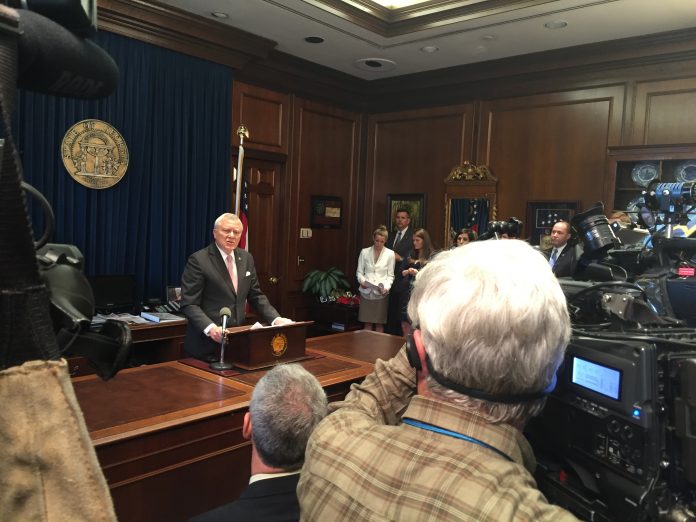 Well, that was fast. At 10 o’clock this morning, just three days after the legislative session ended, Gov. Nathan Deal announced he would veto Georgia’s controversial “religious freedom” bill because it allowed for state-sanctioned discrimination against the LGBT community. As a result, Georgia likely has dodged further widespread outrage and economic boycott threats.

Flanked by reporters in his office, Deal said House Bill 757 attempted to address a problem that didn’t clearly exist and which threatened Georgia’s reputation as a “welcoming state full of kind and generous people.” (Read the prepared version of his remarks here.) He said the First Amendment already provides the protections touted by Christian conservatives, a group that’s often opposed governmental authority.

“In light of our history, it’s ironic those in the religious community feel a need for government to determine religious rights,” Deal said.

Since the “religious freedom” rumble started in 2013, LGBT activists and corporations have blasted the bills for potentially legalizing discrimination. Earlier this month Deal warned he would not sign any legislation that would legalize discrimination, but lawmakers passed HB 757 anyway. While he affirmed his personal belief in “traditional marriage,” Deal cited the Gospel of John to make the case that same-sex marriage doesn’t threaten the union between a man and a woman.

“We are not jeopardized, in my opinion, by those who believe differently from us,” Deal previously told reporters. “We are not, in my opinion, put in jeopardy by virtue of those who might hold different beliefs or who may not even agree with what our Supreme Court said the law of the land is on the issue of same-sex marriage. I do not feel threatened by the fact that people who might choose same-sex marriages pursue that route.”

Nevertheless, conservative lawmakers failed to heed his warning, sparking widespread condemnation of their actions and threats of economic boycott. As part of the Metro Atlanta Chamber’s Georgia Prospers campaign, more than 500 companies including Coca-Cola, Delta Air Lines, and Home Depot voiced their opposition to the “religious freedom” bill. The NFL warned that Atlanta could lose its Super Bowl bid should the bill become law. Most recently, major film studios (Disney, Marvel, Lionsgate, MGM), TV stations (AMC, CBS, Starz), and actors (Anne Hathaway, Julianne Moore, Rob Reiner) have vowed to take Hollywood out of the South. All in all, Georgia faced a potential $6 billion loss without Deal’s veto.

Dave Baker, executive director the Faith and Freedom Coalition of Georgia, criticized the veto as an “unfortunate decision” that would ultimately allow for legalized discrimination against people of faith. Contrary to Deal’s remarks, he believed HB 757 wouldn’t have hurt the LGBT community; the governor, he felt, was simply caving to idle corporate threats. As a result, Georgia remains the only Southern states without a “religious freedom” law on its books.

“By standing against [HB 757], so you’re standing for so-called values of tolerance and inclusivity—it’s a cheap play to get positive press,” state Sen. Josh McKoon, a Columbus Republican, told NPR this morning. “All of these companies do business with some of most oppressive regimes on earth, countries that have actual anti-gay laws, where your sexuality is a crime where you can be incarcerated, canned, or even be subject to capital punishment.”

Georgians who feared they would receive the potential scorn that Indiana endured last year can breathe easy—at least for now. State Sen. Bill Health last week promised there would be an effort to override the governor’s veto, which would require two-thirds approval from both the House and Senate. His colleague, state Sen. Mike Crane, who’s now running for Congress, also pledged that the “fight is not over” in hopes of passing HB 757. However, not all Republicans agreed with that course: state Rep. B.J. Pak of Lilburn tweeted that the attempt to override the veto “[one] of the dumbest thing[s] I’ve ever heard at the Capitol.”

If such a scenario played out, Georgia might face a scenario similar to what recently happened in North Carolina. In a special-called session last Wednesday, state lawmakers in Raleigh passed a measure that banned local governments from passing their own anti-discrimination laws and restricted public school students to using bathrooms that matched their birth gender. Not only have companies blasted the bill, the NBA has already considered relocating the 2017 All-Star Game and San Francisco Mayor Ed Lee banned city employees from traveling there on business.

It’s that very kind of backlash, Deal said, that made signing HB 757 “too great a risk to take.”