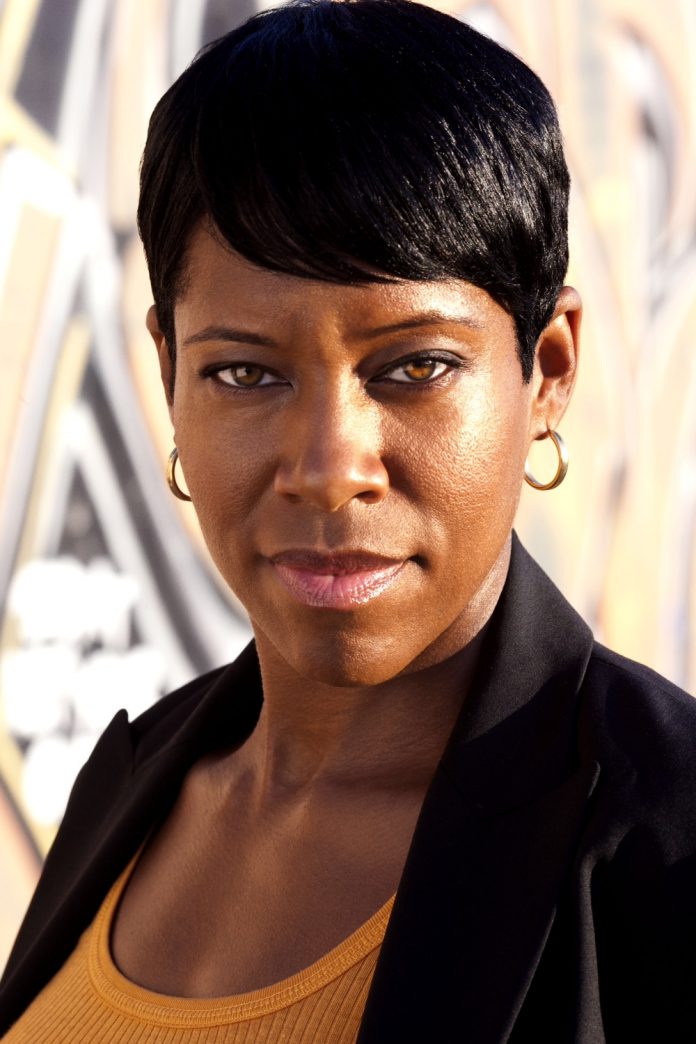 When season five of the critically acclaimed TNT drama “Southland” premieres tonight at 10, LAPD detective Lydia Adams is trying to balance being a new mother and solving the rape of a Latino male who is too humiliated to help the cops assigned to his case. And whether she’s scaling a fire escape chasing a suspect or attempting to  feign cool detachment when her male partner points out she’s lactating on the job, actress Regina King brings a world weary humanity to Adams beneath the brusqueness and wisecracks.

In an exclusive interview with Atlanta magazine, King discusses the new season, directing (!) her first episode of “Southland” this season and delivers some exciting, sure-to-be-controversial news for fans of the Adult Swim series “The Boondocks,” eagerly awaiting news on a fourth season.

Q: Last season, the writers put Lydia through the ringer with this unplanned pregnancy and the rigors of her job. Viewers were left to wonder if she would deliver to term. Did you share those fears?

A: That’s where I thought they were going, to be honest. I would get the scripts and think, “How can she survive one more thing?” But by not losing the baby, there’s a more interesting story to tell. There are a lot more places to go with the storytelling. Lydia’s stress level is now to the fifth power!

Q: Does it strike you as odd to be doing press for season five of “Southland,” a show NBC canceled in 2009?

A: We are all just so happy to be back. We’re like a lot of other shows where the cast holds its breath waiting to hear if we got picked up for another year. You just kind of wait in the wings to hear if you can start singing! There’s definitely that dynamic. But we’re all so happy to be in this company. To work with such amazing talent, cast and crew. When you come back to work and see all those faces you haven’t seen in nine months, you’re ready to get to work and make more magic.

Q: In March, you make your “Southland” directorial debut with an episode titled “Off Duty.” What can you tell us about it?

A: It was an amazing experience. In fact, when I get off the phone with you, I’m heading back into the studio to do some more editing on the episode. It was just unreal the level of support I got from the cast and crew. Everyone just wanted me to succeed. When they found out I was going to direct, the amount of emails I got in the days leading up to the shoot, it was just incredible. Emails saying, “You are going to kick ass, Regina!” That meant so much. It made me realize what a special environment “Southland” is to work in.

Q: How much can you tell us without getting into trouble?

A: I can tell you this: Lydia has to go to an execution. Yeah. She has to go and witness an execution. Is that too much of a spoiler? I hope that doesn’t get me in trouble! (laughs).

Q: Of course, we’re based here in Atlanta, the home of TNT and also Cartoon Network and Adult Swim. You have had a second career performing the voices of brothers Huey and Riley on a certain animated series. Clear up the rumors. Is “The Boondocks” going to get a long-awaited fourth season or not?

A: I think so. There’s been a lot of back and forth. We did record 10 new episodes and we’ll see if they air. We did the final one last year right before Christmas. It was a real interesting experience and I’ll leave it at that.

A: (pauses) There were some things that were inappropriate to the point that I didn’t really…like. Yeah. But they weren’t things that were written by [creator] Aaron McGruder. I don’t even know how to explain it. It started out great. The first three or four episodes [of season four] are really strong and really right there with the social commentary and remaining relevant. But at some point, things kind of changed and I don’t know why.

Q: Last question: What can viewers expect from “Southland” this season?

A: I think the audience is going to be very very pleased. We’re taking you deeper into these characters, deeper than ever before. This season gets really raw. And I hear you saying, “How can the show get any more raw?” Trust, we get pretty close to the bone this year!