Agriculture still drives much of Georgia’s economy, but workers on one of the state’s newest farms harvest energy, not peaches or peanuts.

A former cotton farm in Social Circle, about forty-five miles east of Atlanta, has been converted to Simon Solar, one of the largest solar farms in the United States. Steve Ivey, whose family has owned the land since the 1930s, has covered 150 of its 250 acres with panels that can produce approximately thirty megawatts of energy—or enough to power 4,130 homes for a month. Georgia Power is buying the electricity generated from the farm under a twenty-year power purchase agreement.

This article originally appeared in our July 2014 issue under the headline, “Catching Rays.” 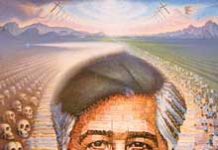