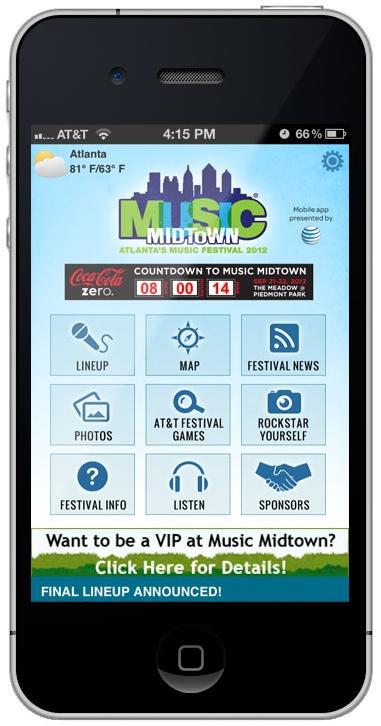 Thanks to AT&T, this year’s Music Midtown festival goers have a brand new guide to tonight and Saturday’s shows in Piedmont Park. Festival organizers are encouraging iPhone and Android users to download the free app before heading out to party this weekend. As a festival veteran (we still carry with us the emotional scars of enduring Ashlee Simpson‘s Atlanta concert debut and a foul-mouthed, off the tracks Courtney Love flashing multiple members of APD working security in 2004…), we opted to road test the app early for readers. Here’s what you should know:

First and foremost, download this app just for the map. After all, the Music Midtown map of Piedmont Park has it’s very own frothy mug icon to indicate where you can buy beer. Of lesser importance, the map function also shows you where the festival gates, ATMs, food trucks and restrooms are located as well. For the 53 percent in Mitt Romney‘s America who pay income taxes, there’s a wine icon for you on the map.

The app’s Line Up function tells you exactly who’s performing on what stage and at what time, provides handy links to the artists’ Twitter, Facebook and YouTube pages (yes, 1980s rocker Joan Jett has a verified Twitter account!), along with band bios (oddly, the Foo Fighters don’t currently have a bio posted) and other cool info. This will especially come in handy for fans wanting to gain exposure to the cool baby bands booked for Saturday at the festival, including Civil Twilight, O’ Brother and LP (According to LP’s band bio, singer Laura Pergolizzi has a penchant for playing the ukulele, for instance). Eighties English pop star Adam Ant, who has publicly battled bipolar disorder, has this posted for his bio: “I am a songwriter and singer, who with the passing of each day, is realizing how much there is to be thankful for and look forward to in the future.” In other words, the reformed bad boy has likely left the prop gun he used to wave around U.K. pubs on the other side of the Atlantic.

The app’s Festival News link is designed to keep attendees in the loop on info organizers might need to relay to the crowds. As of Friday morning, the news section consisted of a series of tweets from the festival’s Music Midtown Twitter account and tweets from bands playing the festival (1990s relics Garbage, for example, appear to be really, really excited about playing for a crowd in a space larger than lead singer Shirley Manson‘s living room). On the app’s Listen link, fans can crank up tunes from festival acts on the Slacker Radio station. The app’s Rockstar Yourself function, meanwhile, promises to magically transform you into a rock god if you grant the app access to the photo roll on your phone.

The Festival Info link offers the usual common sense advice to attending Music Midtown. No, you can’t bring your pets to the festival unless you have a service dog, no glass containers and yes, you may slide in and out of the festival as long as you have your ticket scanned out and then back in upon re-entering the event. And no, you cannot bring chairs of any kind into the event. Because, let’s be honest here, if you require a chair to attend Music Midtown you’re way too freaking old to go to Music Midtown.

Alas, like any app, the Music Midtown guide has a few drawbacks. For example, there is no function that allows you to wash Foo Fighter front man Dave Grohl‘s hair and there is no mass communication link that allows you  to notify the 2012 fans of Pearl Jam that the band hasn’t been musically relevant since fanny packs were in vogue.