Home Uncategorized Stargazing in Atlanta: Your guide to the summer sky

Gaze with your friends
Find an open field, set up away from skyscrapers, and get to gazing.

Candler Park at the corner of McLendon Avenue and Candler Park Drive
Downside: Nearby street lights and Little Five Points brighten things a bit. Upside: Street parking makes it a cinch to get in and out by closing time.

The Boating Dock at Stone Mountain Park
Most of the park is open until midnight, making it great for gazing. Try the public boat ramp on Stone Mountain Lake.

Lake Brantley at Hard Labor Creek State Park
About an hour east of Atlanta, this park gets a nod from astronomers because it’s far enough from city lights. The park is open until 10 p.m. for day visitors, but it’s just $26 to $32 to camp. When darkness falls, head to Lake Brantley near the center of the park, where a small field is open for late-night viewing.

Gaze with an expert
Nothing beats an observatory if you want to get up close and personal with a celestial body.

Tellus Science Museum
Get a great view of our solar system through the 20-inch telescope that’s open during special events at this Cartersville museum.

Fernbank Science Center
This intown observatory boasts a 36-inch telescope, the largest available to the public in the Southeast. Open 9 to 10:30 p.m. on Thursdays and Fridays.

Hard Labor Creek Observatory
Run by Georgia State University, this observatory is open to the public on the second Saturday of every month through October. Observations start 30 minutes after sunset.

Look up—way up
“Summer is known as Milky Way season,” says Daniel Herron, observing chairman of the Atlanta Astronomy Club. Keep your eyes out for: Sagittarius
Look about one-third to halfway up from the southern horizon to find this teapot-shaped constellation. The Summer Triangle
This bright trio of stars—Vega, Deneb, and Altair—is almost straight above our heads during the summer months. Mars and Saturn
These ultrabright beauties are visible throughout the summer. Perseid Meteor Shower
The only drawback to this annual nighttime attraction, taking place roughly between August 10 and 14, is that it happens after 2 a.m. and before dawn. 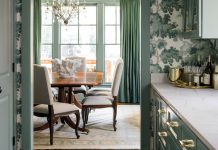