FishCenter Live—Adult Swim’s oddly addictive hit internet streaming show—feels like an aquarium screensaver with a subversive soundtrack. As Hamburger (a zebra morey), Mom (a golden puffer), Hot Steve (a foxface rabbitfish), and nine other tropical fish glide past fluorescent coral, four disembodied voices provide snarky commentary on offbeat topics ranging from rock stars with dad bods to disgusting YouTube videos of popped pimples or the ongoing debate over whether to divide the fish. Even more random viewers chime in via phone, Skype, or chat.

To add dramatic tension, the fish play games. The most popular is Coinquest, where gold coins are superimposed on the screen, and each time a fish swims past one, it earns or loses points. Cohosts Max Simonet and Andrew Choe offer play-by-play, while Dave Bonawits handles callers and keeps score and Matt Harrigan mans music and sound effects.

A typical exchange: “Hamburger keeps winning these goddamn space races,” says jazquitch, a regular fan commenting on another game, where avatars of fish race rockets into the stratosphere. “It’s absurd.”

Adult Swim—a nine-and-a-half-hour block on the Cartoon Network—has delivered absurdist and avant-garde programming, such as the animated Rick and Morty and talk-show parody the Eric Andre Show, for the last 16 years. Now, it’s doubling down on producing a web-based suite of streaming shows. Blending games, podcasts, and variety shows, all with the low-budget and lo-fi feel of public-access television, these live productions are built around mundane themes like lottery tickets, blind dates via Skype, and drawing lessons. The network aims to attract 18- to 34-year-olds, its core demographic, where that group is increasingly spending its time—logged on to watch news videos, professional videogamers streaming Fortnite battles, and Instagram stories.

In late 2014, executives at Adult Swim, the ne’er-do-well stepchild of Turner Broadcasting, directed Harrigan, the network’s vice president of digital content, to create a simulcast for the channel’s website. There was basically no budget. “The other side of the building will spend a million dollars to make 30 minutes of content,” Harrigan says, referring to Turner’s television studio in Midtown. “The joke is, we’ll spend $30 to make a million minutes of content.” In fact, the hosts joke, the majority of FishCenter Live’s budget goes toward paying the guy who cleans the aquarium every week.

Harrigan, an alum of the Late Show with David Letterman, turned to the digital editors, animators, and production assistants who work in a two-story former carpet factory on Williams Street. Why not, the team proposed, build a live-streaming show around the office’s two approximately 120-gallon fish tanks? Harrigan slapped his office phone number on the screen and was surprised when people kept calling. (After the concept caught on, he changed his phone number.) When the team wanted to add a competitive angle and give viewers something to root for, they added the games.

The show quickly began to cultivate a cult following as viewers tuned in every weekday to watch Dottie, Long Donovan, Sir Squirt, and other fish bump into each other and the aquarium glass, feast on live crawfish, and undergo a psychoanalysis and chakra review by an “animal communicator.” When Dottie, a clown triggerfish died, the team covered his passing like the death of the pope and placed votive candles outside the Adult Swim offices. The four grown men who chat about minutiae and fixate on fish tanks are as on display as the creatures themselves; in one episode, Choe filmed a date he had with Dani, a regular viewer from New Jersey.

The simple marriage of TV, internet, and talk radio proved popular, spawning additional shows like Stupid Morning Bullshit, Williams Street Swap Shop, and Desperate Losers—all of which, like FishCenter Live, are hosted by everyday Adult Swim staffers. Then came live performances at Comic-Con in San Diego and sponsorships from State Farm and Snickers. Last year, Adult Swim hired veteran Atlanta radio DJ Mara Davis to book bands in town for concerts, leading to live performances on FishCenter Live—in front of a green screen with the aquarium projected behind them—by Waka Flocka Flame, Jason Isbell, and an appearance from Post Malone (whose finger was bit while feeding Hamburger). In the past, touring artists might have dropped by a local radio station. “Radio doesn’t do that anymore,” Davis says. “This is where the eyeballs are now.”

Though Adult Swim does not disclose how many people tune in live or watch the stream later, a spokesperson says more than one million people have created Adult Swim accounts, allowing them to chat with other viewers and hosts during the streams.

Fans sometimes even send in their own animations, which are occasionally shown on the air; once, the team created the FishCenter Live International Film Festival to highlight the works. In one FishCenter Live episode, Bonawits married Jiyoung Lee, a postproduction coordinator who cohosts a DIY-themed stream called Assembly Line Yeah! More than a dozen chat regulars, including one from Chile, traveled to Atlanta to attend the on-air ceremony. Got a show idea? Adult Swim’s show development executives take pitches from listeners on a streaming show every Thursday evening.

The improvisational format has also become an incubator for talent. Tender Touches, an animated parody of soap operas that aired on the Adult Swim network last year, was a spin off of a daily streaming show called Bloodfeast. The channel is blazing a path for an untested new medium. “It’s a constant pain in my ass, but it’s gratifying,” says Choe, who, as digital broadcast engineer, manages the streaming technology. “We’re doing something no one else is doing.” 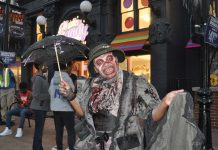 Your guide to a perfect Atlanta Halloween, according to Adult Swim’s production manager