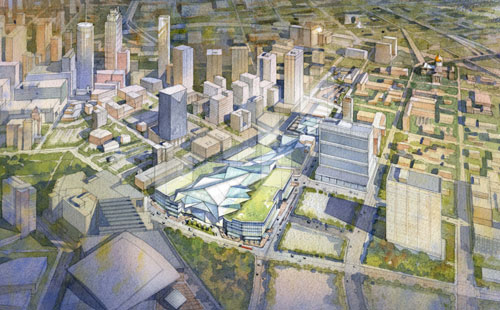 The plan to transform Downtown’s 120-acre “Gulch” into a multimodal passenger terminal (MMPT) literally took shape Wednesday when developers unveiled three possible design concepts at a packed public meeting. In his presentation, John Schuyler, a principal with FXFOWLE design firm, cautioned the audience not to focus on the concepts’ architectural details—a final implementation plan is not expected until late 2013— but rather the general layout and orientation of what could be Atlanta’s hub for freight, passenger rail, buses, streetcars, and even bikes. The AJC gives a rundown of the concepts here.

One point the presenters made clear was that the stature of the facility will be impressive—”something to put on a postcard.” Schuyler used words like “aspirational” and “heroic” and flashed images of iconic transportation centers in other cities. Grand Central in New York. Berlin’s Hauptbahnhof. Liège-Guillemins in Belgium.

Just when he had the crowd really enthralled, Schuyler switched to images of the Gulch and said, “Back to Atlanta,” eliciting laughter.

Yes, back to that. In nineteen days, a divided region will decide whether to levy a ten-year, 1 percent sales tax to raise an unprecedented amount of money—$7.2 billion— for myriad transportation investments. A little more than 50 percent of the funds are earmarked for transit projects such as the Clifton Corridor MARTA line, BeltLine streetcar transit, and buses in Clayton County. (The list goes on; check out the handy interactive map at transformmetroatlanta.com.)

Even though the MMPT is not on the T-SPLOST list (GDOT and MMPT’s team of developers will look to federal grants and private-sector funds), it’s hard to get excited about a transit hub when the fate of the transit systems it will serve remain unknown. My favorite of the concepts, for instance, envisions a double main hall that is bisected by an open street on which streetcars will run. If the T-SPLOST passes, streetcars will operate on portions of the BeltLine—plus two new cross-town routes—in as soon as five years, connecting with MARTA and the Downtown Streetcar in the process. Just as they were at the turn of the century, streetcars are poised to be the lifeblood of Atlanta transit, and I liked that Concept B puts them front and center.

If the referendum doesn’t pass, the BeltLine will still get its transit, but years later. The fate of the cross-town routes would be less certain.

As I trudged back to MARTA in the drizzle without an umbrella, I did warm to concept C, which would seamlessly connect the Five Points station with the MMPT. Just before ducking into the station, I caught a striking glimpse of the Gulch with post-rain steam rising from its depths and sun gleaming off the surrounding buildings. Is it a new day for transit in Atlanta? We’ll know in a few weeks. 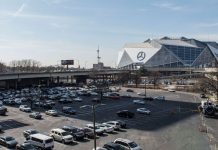 Commentary: The Gulch could connect downtown—and more. We can’t squander that opportunity.