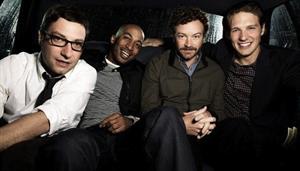 As their network counterpart Conan O’Brien and his family check out below them, upstairs in the Four Seasons hotel bar, the cast of the TBS sitcom “Men at Work” is crashed out at a table littered with partially drained early AM Starbucks orders and breakfast food condiments. Actors Danny Masterson, Michael Cassidy, Adam Busch and James Lesure are in Atlanta to celebrate the launch of the second season of the buddy ensemble comedy (airing Thursdays at 10 p.m. on TBS) created by “Franklin & Bash” actor Breckin Meyer and to take in some college hoops action.

But first things first. On the show, Masterson plays a magazine columnist, Cassidy is a features writer, Lesure is a photographer and Busch portrays an ad sales rep, all allegedly working for the New York-based magazine, Full Steam, which, as far as I can tell, is some cross-pollination between Maxim and Field & Stream. As they bicker and banter about relationships and family issues in each episode, they chat in a tricked out break room that more closely resembles Willy Wonka’s chocolate factory than any magazine I’ve ever wandered into.
Addressing the complete absence of magazine publishing realism on his show, Masterson concedes, “It’s true, we don’t actually do anything. We keep hearing that complaint from the journalists doing interviews with us for the show. Yes, we work at a magazine but we’re never actually working. But in our defense, who would watch 30 minutes of a guy doing Internet research?”

The show’s workplace backdrop merely serves as a device for creator and the show’s main writer Meyer to explore what it means to be a guy in 2013. After all, the war of the sexes is long over, John Wayne is dead, the women won and, even worse, they routinely request us to emote and evolve these days. Says Lesure: “That’s one of the things I love about this show. It feels current and contemporary. There’s a male energy there but there’s also sensitivity there. I like that we have different colors of maleness on our show.”
Adds Cassidy: “It’s one of the things women love most about the show. When I read each script, I love that you’re seeing different sides of these guys. And really, they’re all sides of Breckin and who he is and how he lives life.”

“Basically, the episodes are based on things that have happened in Breckin’s life or in the lives of the other writers,” explains Masterson.

“The stakes are raised season two,” previews Busch. “Especially between my character Neal and his girlfriend Amy. Things that were just little arguments in the first season now expand into ‘are they going to break up?’ and ‘are they going to get married?’ As you get older, there’s more pressure for things to happen and to happen more quickly.”

In tonight’s episode, guest star (and Adult Swim “Robot Chicken” mastermind) Seth Green pops up as a homeless “subway troll” to torture Masterson’s Milo. Naturally, the disagreement escalates into a subway busk-off between the two with each brandishing an acoustic guitar.
“I don’t remember how the chords came about,” Masterson recalls. “First off, Seth can’t play the guitar so I was trying to give him the hand shapes to play certain chords. I think I picked three easy chords and showed him how to play it and we had a little subway jam session. For the record, everyone should have the opportunity to jam on “I Got Robbed by a Man-Bear” with Seth Green.”