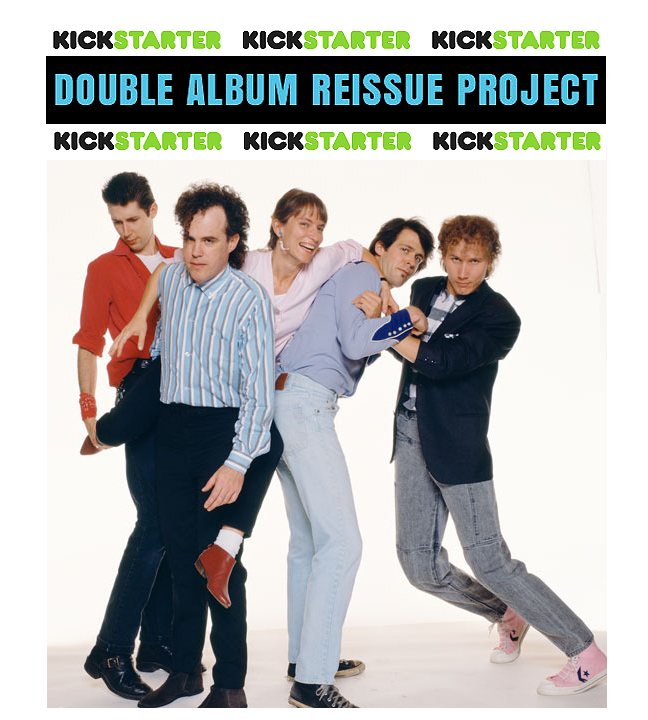 Nearly 30 years after their release, The Swimming Pool Q’s two long-out-of-print A&M albums, 1984’s “The Swimming Pool Q’s” and the 1986 follow up “Blue Tomorrow” are set to finally make their debut in the digital age. Thanks to a Kickstarter campaign started by the legendary rock act (R.E.M opened for Q’s at their debut album release gig at the old 688 club back in 1981, after all), fans have already donated $9,884 of the needed $15,000 budget to press and distribute the  eco-friendly double CD package with bonus tracks and extensive liner notes penned by band co-founder Jeff Calder.

Over the past week, the band’s Facebook and Twitter accounts have kept fans updated about the project’s progress as supporters around the world have shared the link to the act’s Kickstarter campaign with other music fans. Does it humble Calder to know that in an age when the average life span of a musical act is directly tied to how many YouTube views you receive, that Q’s fans are still out there and enthusiastic to support the campaign as the band celebrates its 34th year of existence? “Yes it does,” Calder tells Atlanta magazine. “Thankfully, we’ve got great people running the Kickstarter site and  the band’s social media sites. I couldn’t have done this by myself. Once you launch a Kickstarter campaign, it quickly becomes a toboggan ride. Otherwise, I’d be strapped to a Xanax the size of an automobile, nibbling on it just to stay sane!”

In addition to the two 1980s albums, supporters also have an opportunity to score copies of the Q’s rare vinyl 45s (with hand-stamped sleeves) of the band’s first single “Rat Bait” b/w “The A-Bomb Woke Me Up,” gig posters and a DVD filled with humiliating appearances on teen music shows and promotional A&M videos. For a top tier donation of $2,500 or more, the band will set up in the venue of your choice and perform a 90-minute show for you and your friends, filled with material from “Swimming Pool Q’s” and “Blue Tomorrow” as well.

However, the fan favorite thus far is the pledge gift at the $900 donation level: Dinner with the Q’s at your favorite Olive Garden location. When we bumped into Q’s vocalist Anne Richmond Boston last weekend at the Decatur Book Festival she confided laughing, “Personally, that’s my favorite!” Two supporters have already signed up for five available dinners. “I think [Q’s guitarist Bob] Elsey came up with that,” Calder says. “And we’re not tied to Olive Garden either, man! We can go to the medium-priced eatery of your choice. But I am partial to those all you-can-eat breadsticks.”

Calder says the albums are already re-mastered and ready to go if the fans come through with the funding. “I gotta say, they still sound good to me too,” he says. “I’ve listened to the albums over the years but hearing the master tapes again was an experience.”

Calder is particularly proud of the sophisticated sound present on “Blue Tomorrow,” recorded as a sweeping 48-track production with U.K. producer Mike Howlett, the first album to ever be digitally mastered at Howlett’s insistence. Alas, the creative types at A&M decided on the 1986 album’s cover, featuring the band posing with miniature horses on loan from Florida’s Herriott animal circus. And yes, in an age before PhotoShop, the band did actually pose with the animals.

“If you look closely at that album cover, you’ll note we look a little tensed up,” Calder recalls. “As it turns out, those horses are kinda mean.  We were trying to avoid any sudden movements because we didn’t want to get bit. They look all cute and everything but they will take a bite out of you!”