Home News & Opinion Arts & Events The Constellations offer new tales of the city on Do It For... 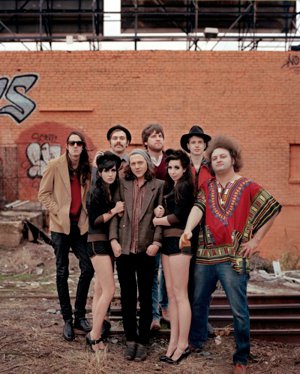 Despite a catchy chorus and name-dropping the street in question, “April,” a track off Atlanta act The Constellations new sophomore effort, “Do It For Free” will likely not become the official anthem of Atlanta city councilman Kwanza Hall‘s Year of Boulevard clean up initiative. Especially since the title character is a coke-addicted hooker turning tricks in alleys for blow whose body is eventually discovered in a dumpster on the corner of North Avenue and Boulevard. While “April” won’t be used in any marketing campaigns, the song illustrates what Constellations fans love about the gritty, organ-fueled rock and soul act. The new number will undoubtedly be on the band’s set list Friday night as they headline the second annual Riverview Landing Fall Festival in Mableton.

“April is actually a real person but I definitely embellished on the situation,” explains Constellations lead singer and songwriter Elijah Jones, a guy who grew up sneaking into the city’s late-night rock clubs like The Point, Dottie’s and The Wreck Room as an underage kid. “I have no idea if she’s still alive or not. She was a friend of mine back in the day when I was running around the streets of Atlanta, doing bad things. For me, it’s also a reflection of that neighborhood. When you drive down Ponce de Leon toward the city and turn left, you’re on Boulevard, probably one of the most crime-laden neighborhoods in the city. But if you turn right, it becomes Monroe [Drive] with million dollar houses. One of the points I was trying to make is that the south really hasn’t changed that much where segregation is concerned and I wanted to shine a light on that. Somebody’s daughter is out there, you know?”

Balancing out the city-centric themes on “Do It For Free” is the celebratory “Back in Atlanta,” an ass shaking, horn laden homage to the shimmering skyline that greets you coming home on I-75. Jones says the song began germinating in his head as the band was coming off a tour for the Constellation’s debut effort “Southern Gothic.”

“We were broke down in Arizona,” Jones says laughing. “I was driving and a semi was next to me and a wheel popped off a truck and bounced under the semi and I started fish-tailing. There we were, stuck in the desert with the sun beating down on us. You start thinking about how nice your hometown is about then so I started writing the first verse right there.”

And while Friday night’s Riverview Landing Fall Festival in Mableton features food trucks, hay rides, a corn maze, a “hairy man” contest and Jones in a hot air balloon to kick off the festivities, the family-friendly outdoors gig is not the weirdest booking for a band more accustomed to playing Smith’s Olde Bar and Star Community Bar. The Constellations spent their summer on the Warped Tour, after all. Also on the bill? The guyliner, emo teen-attracting electronica act Blood on the Dance Floor.

“It was definitely a different crowd for sure,” Jones says. “We’re used to bar crowds. This summer, we saw a lot of young kids who don’t normally fall into our demographic, but it was cool. For the first three songs of our set, they would look at us all cock-eyed like, ‘What the hell is this?!’ but then they got into it. Blood on the Dance Floor’s set was strange. It was like watching Kiss set to dance to music with lots of screaming 13-year-old girls. The kids love them. We’re definitely looking forward to playing back in front of our audience again.”

Tickets to see The Constellations Friday night at Riverview Fall Festival are $10 in advance via Ticket Alternative.