When I worked at Peachtree Center more than a decade ago, there was a very nice Italian man named Tony who ran a pizza shop in the food court. He had a running joke with me, my co-workers and other people we knew nearby. When we talked to him about tasks we had to accomplish, problems we were having, etc., he would often pause dramatically and burst out with “Eat more pizza.” To the guy selling pizza, the solution to all of life’s problems was obviously for you to buy more pizza. From him.

Remember that today and this weekend when you see and hear gun lobbyists (or a politician paid for by gun lobbyists) on CNN or on local Republican talk radio. The pizza guy says “Eat more pizza” and everybody knows it’s a joke. But when the gun lobbyist answers “Buy more guns” to every question, people turn off their brains and pretend he’s speaking up for Constitutional principles and individual freedom. He’s really just selling guns. 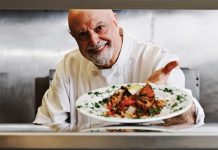 The happiest chef in Atlanta—Aviva’s Kameel Srouji—explains his secrets. And why he loves you. 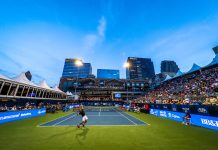 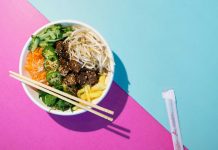 Going to Dragon Con? Peachtree Center has a ton of new restaurants—and a lot of construction