Early in the morning on the day after Christmas, Kris Hoffman’s phone rang. Her neighbor was calling to report that Abby, Hoffman’s black Belgian Shepherd dog, was in the neighbor’s yard playing with her husky. “But I looked down, and Abby was there in my bed,” says Hoffman.

Hoffman got dressed and headed over to her neighbor’s house around 6 a.m., where she did indeed find a black canine romping around the yard with the husky. But it wasn’t a dog. “I knew right away it was a coyote,” she says.

Coyotes aren’t out of the ordinary in wooded suburbs like Vinings—Hoffman has seen them in her yard, drinking from the bird bath and snacking on fallen fruit from her persimmon tree. This particular coyote, however, was highly unusual, both for its rare jet-black coat and its friendliness with domestic dogs.

Hoffman called Chris Mowry, a Berry College biology professor and cofounder of the Atlanta Coyote Project. Mowry’s organization tracks and studies coyote populations in the metro area but rarely intervenes in their lives—in part because, by law, any coyotes trapped in Georgia must be euthanized. In this case, however, Mowry and his colleagues were concerned about how habituated the animal seemed to be toward humans and their pets and felt as though they should step in before someone—either a pet or the coyote itself—got hurt. “The kicker was the coyote trying to enter someone’s home through their dog door,” says Mowry.

The group got permission from the Department of Natural Resources to capture the animal without having to euthanize it and secured a potential home for it at the newly restored Yellow River Wildlife Sanctuary in Lilburn. Then the search for the black coyote began.

Mowry knew it would be challenging; coyotes are shrewd animals that learn and adapt quickly. (Wiley, some might say.) On the Coyote Project’s Facebook page, Mowry asked the public to keep an eye out. The number of people in the search party snowballed. Animal rescuer Lara Shaw of Angels Among Us Pet Rescue parlayed her experience tracking lost dogs. Licensed wildlife trapper Brandon Sanders offered his humane trapping equipment and expertise, free of charge. Wildlife biologists and veterinarians from around the country shared with Mowry their insights on the coyote’s behavior. Hoffman herself spent most evenings out walking with Abby and calling for the animal, who she named “Carmine” after the Laverne & Shirley character played by Eddie Mekka. (“He has jet-black hair and big white teeth, and he’s a troublemaker,” Hoffman explains.)

In the weeks to come, residents across Smyrna and Vinings shared sightings, photos, and videos of the animal scaling their backyard fences, playing with their dogs, and trailing behind them on evening walks. Meanwhile, Mowry compiled a map of sightings and watched as the animal’s movements crisscrossed from Vinings to Smyrna and, eventually, across I-75 to Marietta. “Once we started looking at the map, you could see the route that it almost certainly took,” says Mowry. It used culverts to safely trek underneath interstates and followed the Chattahoochee River, making use of the trail system alongside it to head north. “This is one of the busiest traffic areas in all of Atlanta, and it was routinely going back and forth,” says Mowry. “The map really allowed us to see how this was possible.”

Everywhere Carmine went, his trackers followed in close pursuit with traps at the ready. There were close calls, like the night Mowry set a trap on someone’s front porch, where Carmine had spent the previous evening curled up on an outdoor couch. Mowry and Sanders stood by and watched from a live camera feed as Carmine warily sniffed the trap, but the coyote didn’t fall for it. “We chased this animal all over Smyrna and Vinings for weeks,” says Mowry. “And he probably thought, ‘Jeez, everywhere I go this dumb trap shows up.’”

By the time Carmine made it to the home of Glenda Elliott in mid February, the search party had been pursuing him across the suburbs for nearly two months. Elliott, whose Marietta backyard abuts the Cochran Shoals trail, first encountered Carmine the same way so many others had: the animal jumped the fence into her backyard to play with her three black rescue dogs. This went on for days. At one point, the coyote even made off with one of the dogs’ plush chew toys. “It was so sweet,” says Elliott. “He just picked it up like, ‘This is mine now.’”

After posting a photo on Facebook and being directed by friends to the Coyote Project, Elliott reached out to Mowry. That night, Shaw, the dog tracker, set up a camera and food in Elliott’s yard. A few nights later, at around 1 a.m., Mowry woke up to a phone call that he’d been anticipating for over a month. “Every night when I went to sleep, I’d wonder, is this going to be the night?” he recalls. Motion in the trap had triggered an alert that notified Sanders, who immediately called Mowry: “We’ve got him.”

Mowry, Sanders, and Shaw rushed to Elliott’s yard, where they finally came face-to-face with the animal that had eluded them. In the trap, Carmine seemed surprisingly calm.

In the days following Carmine’s capture, media descended on the story. “Watch a black coyote and a dog form a rare friendship,” one CNN headline proclaimed. “A rare black coyote couldn’t stop making friends with dogs,” wrote Business Insider. The complexities of inter-species behavior, distilled to a clicky headline, made for feel-good viral hits. But, while Carmine’s Disney-worthy interactions with dogs were unusual, they’re not nearly as telling as the reactions he elicited from humans.

In Facebook and Nextdoor threads, some commenters insisted the animal should be allowed to roam free and rebuked the idea of capture altogether. Others threatened to take matters into their own hands and shoot the coyote, which they perceived as a threat to their pets, children, and communities. Judging from the public’s response, Carmine was either a precious wonder or a vicious parasite.

Few animals seem to bring out quite as much charged rhetoric as the coyote. Their history as a nuisance to humans goes back to the days of Manifest Destiny, when white Americans began pushing into the West in greater numbers for herding and ranching. The animals have long wreaked economic havoc on ranchers by preying on their animals; in cities and suburbs, that prey is sometimes pets. For its part, the federal government kills an estimated 68,000 coyotes a year. And humans have displaced them by razing forests and building subdivisions in former woodland habitats, which exacerbates the potential for human-wildlife conflict.

“Killing coyotes may have a short-term effect in alleviating the problem, but there’s always a price to pay,” says Crabtree, adding that curbing populations of the ultra-adaptable and resilient species can kickstart adaptive mechanisms that only strengthen its numbers. “The old trapper saying is, ‘kill one coyote and two come to its funeral,’” Crabtree says. “That has a really strong scientific basis.” Perhaps the most effective population control measure for coyotes? Wolves. But they were largely eliminated in the lower 48 by the mid-19th century, for many of the same reasons. “Coyotes are everywhere,” Crabtree says, “and they’re everywhere because of our actions.”

Crabtree says there are things humans can do to more peacefully coexist with coyotes: Don’t leave pet food outside, don’t allow domestic cats to roam freely outdoors (which also wreaks havoc on songbird populations), and, more broadly, challenge ourselves not to think of humans as the protagonists of the natural world.

After five years of advocating for coyotes in Atlanta, Mowry had grown accustomed to fielding the kinds of questions and concerns that residents raised during the search for Carmine: Does its fearlessness suggest it has rabies? Will it attack my kids? (The answer to both: probably not.). But he’d never before seen neighbors express such care and delight for a coyote. “It was heartwarming and gratifying to see that people were interested in this animal, in the welfare of this animal, in learning more about the animal,” says Mowry. ”At the same time, we are squeezing these animals out of their habitats, and they provide a benefit to us.” Learning to coexist with coyotes is, from Mowry’s perspective, not just a crunchy moral question of solidarity with animals but an ecological necessity to avoid throwing an increasingly precarious ecosystem further out of whack.

On the early morning of Carmine’s capture, on February 17, Mowry and Sanders drove the coyote to his new home at Yellow River, arriving just before dawn. Mowry made the drive with mixed feelings. He was happy that the team had accomplished what it set out to do, yet sad to see a wild animal placed into captivity. “It was a difficult decision,” he says. “But it was a decision where we were faced with no other real alternative. It was for his own safety and the safety of others, and it just would not have ended well otherwise.”

Carmine is settling into his new home, where a February veterinary exam determined the animal to be 38 pounds and 11 months old. More recently, he is being carefully introduced to his future companion: Wilee, a friendly female coyote who was raised by humans. The pair can see and interact with each other from adjacent pens, and will hopefully be placed in a secure pen together in the coming weeks. “They seem to be friendly toward one another and excited about being next to one another,” says Mowry. “We don’t want to put them together too soon; we want them to get used to one another, and we also want to secure the eventual pen that they’ll be in together, so that they’re both comfortable and safe and can’t get out.”

After a vet exam, Carmine’s DNA was sent to the Canine Genetics Project at Princeton University, through which Mowry and fellow researchers hope to learn whether Carmine’s unusual coloring and behavior are the result of hybridization (interbreeding between coyotes and dogs). DNA analysis could also hold clues to the animal’s social nature. In 2017, Princeton researchers identified a “hyper-sociability” gene in wolves and dogs; could coyotes have it too? “We’ll have an opportunity to look for that in Carmine,” Mowry says. Mowry even wonders whether there could be any linkage between Carmine’s behavior and his coloring. A similar case of an ultra-friendly black Alaskan wolf named Romeo from several years ago makes him wonder whether a melanistic trait could be linked to both animals’ unusually playful behavior.

Some hope that, beyond contributing to genetic research, Carmine’s story can continue to play a role in recasting the coyote-human relationship.

“Coyotes were living in Atlanta long before it was populated as densely as it is, and we kept pushing them further and further,” says Elliott. “If we can have stories that make people realize we can coexist and that they provide value from an environmental standpoint, that’s the biggest thing he can bring to the table.” 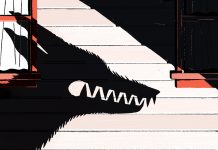