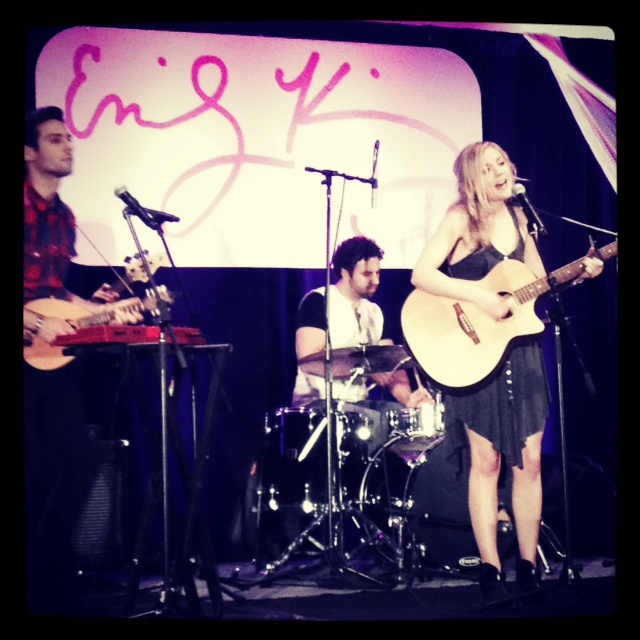 When you’ve spent the day slaying the VIP lines for a photo op with the cast of The Walking Dead (not to mention the opportunity to have Andrew Lincoln sign your bra), you require a little music to soothe your inner frazzled zombie warrior. Enter New York City singer-songwriter Emily Kinney’s cool Saturday night acoustic-based set at the Walker Stalker Con at the Westin Peachtree Plaza downtown. For the past three seasons, Kinney has played Beth Greene, Hershel’s youngest traumatized daughter on the locally shot hit AMC drama. But Kinney’s wry observations on the complicated single lives of urban millennials on her brand-new EP Expired Love are a world away from Beth’s rural Georgia reality of the staggering undead, seemingly forever on a midnight munchies run for brains.

“There aren’t as many zombies in the crowd as I thought they’d be,” Kinney giggled to an appreciative capacity crowd on Saturday evening. “I did a lot of radio interviews this week and the question came up, ‘If zombies come to your show, will they clap?’” Kinney quickly got her answer (even from former Walking Dead castmate Iron E Singleton, who was spotted applauding down front, cloaked beneath a zombie mask to throw off after-hours autograph hounds).

Before a private concert Sunday night for the cast and crew of the show, Kinney reflected to Atlanta magazine on her wild weekend. “It’s been a lot of balancing!” she laughed. “But it’s been so great for my friends from The Walking Dead to have a chance to see me perform and to meet my musician friends and for them to meet my friends here. I enjoy both so much so it’s cool to have them together!” Given Kinney’s musical abilities, having Beth sing on the show (notably last season’s emotional rendition of Tom Waits’ Hold On) was a natural decision for the show’s writing team but, according to Kinney, it wasn’t hard-wired into Beth’s DNA in the beginning. “It wasn’t in the break downs for the character when I auditioned for it,” she recalled. “It was really just something that happened between seasons two and three. The thinking was, this family needed a moment to connect, not fight and to take a breath. Well, how do you do that when you don’t have music or TV? People need that release. So that’s what inspired that campfire scene. It was a great way to reveal a little more of who Beth is. Viewers got a little more insight into this creative, smart woman. It opened her up a bit.”

At Saturday night’s show, Kinney got some vocal assistance from the crowd when she performed Julie from her new EP, a song devoted to that omnipresent female who is perennially plotting to keep you away from your prospective beau. “It resonates with people, no doubt,” Kinney conceded, laughing. “I did write it about a particular situation. I was really interested in this person and she was just always there. In life, I would never go up and say to someone, ‘Yo, get away from my dude.’ But it’s perfectly OK to do it in a song. You can be totally honest in that moment.” On Married, another song from Expired Love, Kinney suggests another potential cultural touchstone in the era of drunk-dialing and drunk-texting — drunk weddings. The song centers on a tipsy couple canoodling on a couch at a party, blissed out on kisses, wine and the sugar rush from a nearby candy bowl. Explained Kinney: “When you’re young and living in New York, especially if you’re an actor who’s moving around a lot, when you meet something and have a connection, there are always so many opportunities these days to opt out. It’s somehow always easier to find something wrong with the person and walk away. This is a song about what happens if you didn’t. Dating can be so awful. The idea was, ‘Let’s just skip the trial period and just do this!’ If was a fun ‘what if’ to explore.”

On Nov. 25, Kinney will join the ranks of Jennifer Nettles, The Civil Wars and John Mayer when she debuts as a performer at Eddie’s Attic in Decatur. “I’ve been there before but I’ve never played there so it’s really exciting,” she said. “It’s a little intimidating but I’m hoping the people who come to the show will want to hear my songs. I’m hoping they’ll connect with my music. I always feel like I have a lot to learn. I’m always looking for ways to learn from other artists and situations.”

Since she plays opposite Atlanta native and veteran actor Scott Wilson (who plays patriarch Hershel on The Walking Dead), has Kinney fired up her TV dad’s most famous film, playing real-life killer Dick Hickok opposite Robert Blake in 1967’s In Cold Blood on Netflix? “Better!” Kinney spilled. “Scott actually showed up one night with his old screen test for that film. Someone was archiving something and they found his screen test and sent it to him. He asked me and Lauren [Cohan, who plays Beth’s older sister Maggie on TWD], ‘Would you like to see this?’ We were like, ‘Are you kidding? YES.’ It was so cool. Scott is the best. I love working with him. In some ways, he’s like a dad to me. I feel like I can call him up anytime. I really love him. Because we shoot here together, this cast is bonded like a real family.”

For more info on Kinney’s music, visit her official website.