Home News & Opinion From the Magazine The Thiokol factory explosion is a largely forgotten tragedy. Survivors want to...

Jannie Everette stood up from her desk in a Camden County High School classroom and felt the earth shake. Fifteen miles away, a fire at the Thiokol munitions factory just outside of Woodbine had triggered a chain reaction of blazes, culminating with an explosion that filled the sky with flames. Students were released early so school buses could be used to evacuate survivors. In those first terrifying moments on February 3, 1971, Jannie had no idea if her mother, who worked at Thiokol, was alive or dead.

Jannie’s mother, Lucille, who is now 78, survived. But 29 of her coworkers died at the scene or later in the hospital. At least 50 others were injured. “I guess God had other plans for my mother,” Jannie says. The tragedy made national headlines, prompted multiple lawsuits, and changed how firefighters respond to emergencies.

But over the years, the incident began to fade from memory. When Jannie moved back in 2010 after a career in the Army and federal government, she learned that her nieces and nephews knew nothing of the disaster. A 500-page history of the county devoted just a few sentences to the explosion. The only physical reminder of that day is a granite marker at a county park.

In 2015 Jannie founded the Thiokol Memorial Project, a 501c3 whose ultimate goals are congressional recognition for the victims and a memorial and education center in Camden County that would keep the story of that day alive. “This is about commitment and courage,” she says. “That’s worth remembering.”

The facility was still relatively new when the explosion ripped through it. The compound was constructed in 1964 on 7,400 acres that used to be a plantation where as many as 200 slaves once toiled. Initially the plant built and tested solid propellant rocket motors for NASA’s Saturn I program. It retooled to supply the war effort in Vietnam, winning a contract to manufacture 750,000 tripflares—devices with hidden wires that, when tripped, trigger flares that alert soldiers to the enemy.

Lucille worked on the plant floor of M-132, one of 36 buildings in the Thiokol complex, where she and her coworkers, mostly women, assembled the tripflares. The fire started at a work station where chemicals were combined to form pellets that helped produce the flare’s bright-white light.

Survivors of the explosion say that small fires were an occasional hazard, but they were always quickly extinguished. “This fire was different,” Lucille recalls. “You could hear it coming down the assembly line.” The fire set alight illuminant pellets stored nearby, ultimately burning through to a room containing volatile chemicals and then consuming a room that contained more than 56,000 flares. Survivors remember two smaller explosions followed by an enormous blast.

“All we could see was fire in the sky. Flares were shooting everywhere, and the ground was shaking,” says Mamie Jenkins, who worked in another building. The blast knocked Karen Jordan Cannon, who worked in the facility next to M-132, off her seat and ripped the front wall of her building. Outside, the grass was on fire. She was pulled to safety by a group of coworkers. Annie Mae Hutchinson James was struck in the head by debris while fleeing the building then bled to death on her way to the hospital.

Dozens of children lost someone that day. Bettie Miller saw her mother, Annie Lois Williams, on TV news footage that night, strapped to a gurney on her way to be airlifted to a Jacksonville hospital. She died there. Miller, then 13, was the second oldest of six siblings. “My mother always left me in charge,” she says. “How could we know when she kissed us all goodbye that morning it would be for the last time?”

The survivors and the family members all have harrowing stories like this. So do the firefighters who came from 15 surrounding cities and jurisdictions stretching into Florida, the Navy and the Coast Guard helicopter pilots who airlifted victims, and the doctors who treated people at the scene.

Jannie wants to preserve those memories. The project has a five-year plan that includes a 50-year commemoration in 2021 at what she hopes will be a new national memorial. A majority of Congress must approve the creation of a new park. County officials want to turn the former site into a launch pad for satellites but are supportive of some sort of tribute to the victims.

Right now the memorial, museum, and the education center are without a price tag, though Jannie estimates the entire project, including the establishment of an endowment, would cost $50 million. Run by a board that includes Everette and former Thiokol employees, the organization has raised pocket change so far, mostly from individual donors, and plans to seek public funding. Jannie’s met with U.S. Representative Buddy Carter, whose district includes Woodbine. “Those employees were working to help our country during wartime,” Carter says. “It would be irresponsible of us if we didn’t do something to remember what happened.”

In 1976 the plant was sold to Union Carbide, which produced agricultural chemicals. Thiokol stayed involved in the space race. The company made the solid rocket boosters that caused the Challenger space shuttle disaster, killing seven astronauts on January 28, 1986, 15 years after Woodbine.

The Woodbine explosion led to 17 years of lawsuits, in which 25 plaintiffs argued that the Army hadn’t notified Thiokol that the flares should be treated not as a fire hazard but as an explosive. They originally asked for $717 million from the federal government but ultimately settled for less than $20 million.

Whatever comes of the ambitious memorial project, there is at least one tangible monument to what happened in 1971. Within 40 days of the explosion, the town raised money to build a daycare center in Woodbine for the children whose parents died, were injured, or witnessed the blast.

“That daycare center is still open today in the same place,” Jannie says. “Everybody came together as a community to make that happen. I’d like to see that happen again.” 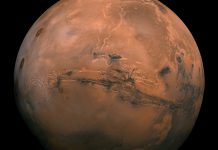 Four Georgia science teams share one mission: Getting us to Mars