Taking the stand at his own murder trial, a tearful William Cormier III implied that it was not him, but his twin brother, Christopher, who killed former journalist Sean Dugas in his Pensacola, Florida home in 2012. But the Escambia County jury was unmoved, convicting William of murder and sentencing him to life in prison without parole.

According to the Pensacola News Journal, William testified that he was simply following his brother’s instructions, which included buying a tarp, cement, air fresheners, and plastic tote, driving said container to Winder, Georgia, in a U-Haul, and burying it in their father’s back yard. Acting on a tip, local authorities later dug up the tote to find Dugas’ body, skull bludgeoned with a hammer, folded inside.

William’s trial and sentencing came just days after Christopher pleaded no contest to charges of accessory to murder for his part in the murder. According to the PNJ, Christopher testified that he did not see William kill Dugas, but later found the body in the garage of Dugas’s house, where he and his twin had been staying. Christopher did admit to helping William place the body in the bin and transport it to Georgia. For that, he was sentenced to serve fifteen years in prison.

No death penalty for Georgia twin accused of murder 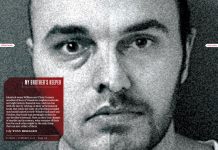