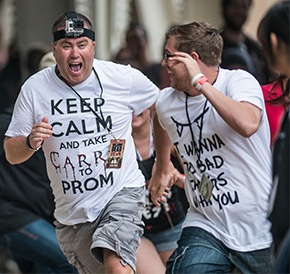 Until you can put that CDC Zombie Apocalypse Preparedness into use for real, Walking Dead comics creator Robert Kirkman has a fun alternative for the AMC drama’s legion of fans. And it heads this way May 31 when Philips Arena will play host to The Walking Dead Escape zombie obstacle course experience.

The “one-of-a-kind immersive” obstacle course, riddled with flesh-hungry zombies developed by Skybound, Kirkman’s imprint at Image Comics, has created a crazy cool playland for Walking Dead addicts. Fans can participate either as walkers or survivors, and you have to climb, crawl and slide your way through multiple “zombie-infected evacuation zones.” Survivors who are lucky enough to reach the decontamination zone “will have their level of infection assessed” and then be invited to participate in the fan experience.

And yes, those of you who choose the walker route will be zombiefied by professional undead make-up artists and receive exclusive “zombie training” prior to your release to feed on unsuspecting survivors. But never fear, The Walking Dead Escape is not a race, and you’re not timed or required to run. Only if you want to live, that is.

The Escape fan experience began as a one-off stunt at San Diego’s Petco Park in 2012 before expanding last year to cities, including New York, where fans played aboard the USS Intrepid aircraft carrier.

Says Kirkman in the press release sent to Atlanta magazine: “I’m thrilled to offer fans new and old an even bigger, more interactive experience this time around. It’s great to see fans of the comic book and television series live in the world I created so many years ago.”

VIP Survivor tickets (including a T-shirt, access to a VIP lounge and the option to run/stagger through the course twice, once as a survivor and again as a walker!) will set you back $150 while a regular Survivor ticket costs $75, and you can choose a start time between 6 p.m. and 11:45 p.m. on May 31. (You’ll need to arrive 30 minutes before your survival time.) To be a walker, it’ll cost $95, and you are required to be there two hours before your creeper time for make up and training. Spectator tickets can be had for $20.

Our advice? Just don’t pause to look at the flowers. That tends to end badly.

For more info or to purchase tickets, click here.