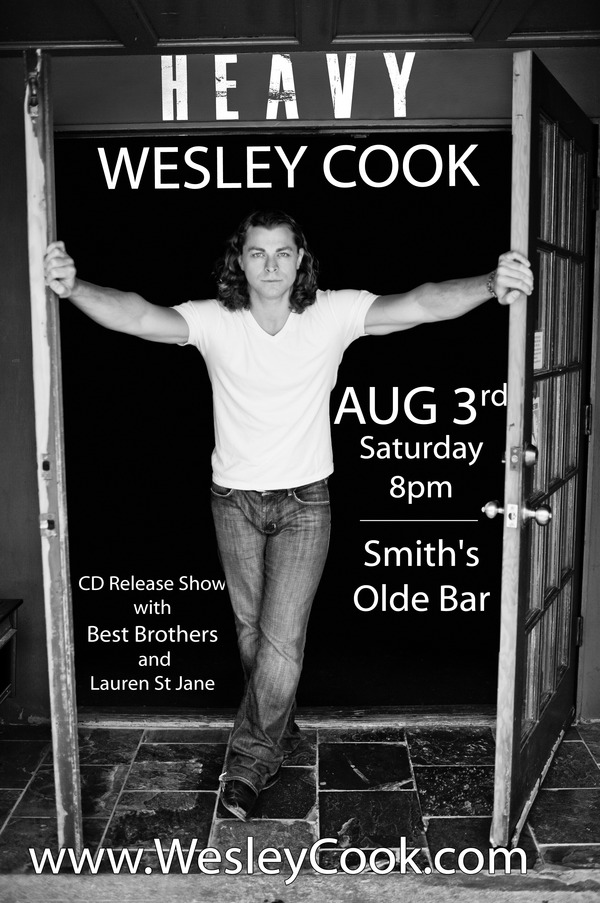 On Saturday night at his Heavy release party at Smith’s Olde Bar, the moment of truth for Atlanta singer-songwriter Wesley Cook will arrive when the album’s closing track comes up on the set list. The song, Where We Want to Be (and indeed Cook’s entire new album) is dedicated to his brother Doug, who took his own life in April 2012. In the emotional track, Cook communicates directly to his brother, singing “I beg you, let me carry you” and “Until we are reunited, I’ll see you in my dreams.” The emotional wallop aside, vocally, the song is also demanding, ranging from a soft vibrato to a soaring falsetto and a big rock finish. When Cook recorded the song in January, he locked himself in a darkened vocal booth with a bottle of water, a cup of coffee and sang the song to a photograph of his brother.

“It’s going to require a lot of focus,” Cook says simply. “I just need to focus. This album release has been this surreal, blurry oasis in the desert for so long and this week for the first time, I can see the texture of the trees and the water rippling. It’s becoming very real. That’s making me be in touch with a lot more stuff. I’m not afraid of feelings or showing feelings so we’ll see. I just hope I get through the song. Where We Want to Be is something I’ve only played out live maybe three times so far. But every time, people come up afterward and hug me. There’s a lonely little corner in everybody where that pain is. And you don’t know how far along anybody is on their journey of recovery. Only the music can really get in there and hopefully heal that for each of us.”

But Cook is used to challenges. Last winter, he and his band recorded all the tracks for Heavy at Blade Studios in Shreveport, Louisiana in four days while he battled an acute case of laryngitis. “It’s exactly what you shoot for when you book time to record an album!” says Cook, laughing. “You just try and kill it as soon as possible. Believe it or not, 90 percent of the vocal takes on the album are from that session.”

His University of Georgia Linguistics degree not withstanding, Cook had little choice but to follow his musical destiny. After all, he was born on the same West Germany military base where Elvis Presley met Priscilla Beaulieu. But it wasn’t until the freshly graduated UGA student worked security in a mosh pit facing an adoring crowd of 36,000 for his musical idols, The Dave Matthews Band at Lakewood in the summer of 2004 that Cook was inspired to pursue a fulltime music career. That night, after the DMB show, he drove to Athens and played an open mic.

“I was this close to signing on the dotted line to be in a desert somewhere as a [linguistics] special forces candidate,” Cook reflects. “That Lakewood experience caused me to snap out of all that. The magnitude of staring out at that sea of people was magical to me.”

It’s You, the first single from Heavy (and featuring a shot-in-Atlanta video co-starring Piedmont Park, the Beltline, Smith’s Olde Bar, cameos from Cook fans and a bulldawg cap) is a song Cook was inspired to write after watching two random strangers check each other out, moments apart at Hartsfield Jackson International. “The What If of it was just bloody perfect,” Cook says. “A lot of life happens there. As a songwriter, you just get pulled into all those potential stories and lives. The idea that these two people might have been soul mates was just too good to pass up.”

While fans will finally get their hands and ears on songs from “Heavy” Saturday night at Smith’s, Cook sent his family rough mixes of Heavy as he was completing the project earlier this year. “The feedback was very positive,” he reflects. “And we’re not Yes People with each other. It was difficult for them. I think I let the ghosts hit me harder than other people do. It was cathartic for me and I hope it was cathartic for them because we’re all in the same boat. We’ve grown a lot closer as a family and I’m grateful for that.”