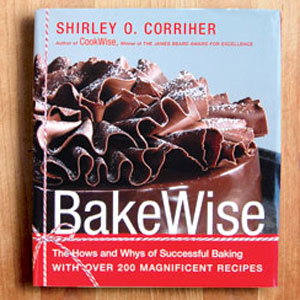 Corriher, an Atlanta biochemist who became a recipe consultant to food companies and cookbook authors, made the science behind food accessible—chatty, even—in her first book, CookWise. Late last year, after a dozen years of testing and tinkering, Corriher published its sweet-toothed sequel. BakeWise is a tome of cakes, cookies, pies, and breads full of clear, infallible instructions that demystify desserts (as well as savory pastries) for those who don’t consider themselves bakers. It also elucidates the chemistry behind flours, sugars, and leaveners for those who geek out on such esoterica.

Corriher’s point of concentration is not strictly Southern, but her recipes for gloriously puffed spoonbread, meringue inspired by Bill Greenwood of Greenwood’s on Green Street restaurant in Roswell, and her famous “touch-of-grace” biscuits do the South and Atlanta more than proud.