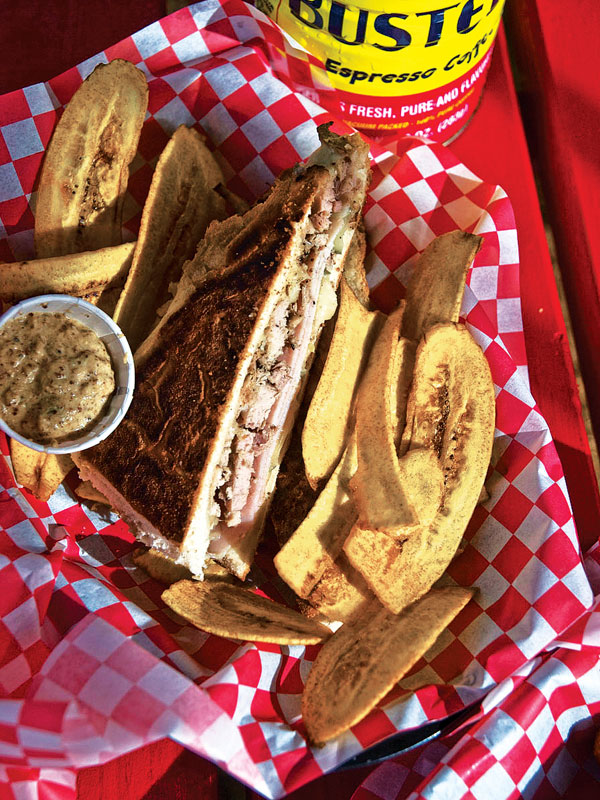 By John T. Edge
From The Truck Food Cookbook

A proper cubano sandwich is pressed flat until the weight of the griddle and the goo of the cheese seal shut the envelope into which the pork and ham have been stuffed. While most cubano recipes rely on roast pork shoulder, this sandwich, inspired by Eric Smith and Hector Ward at The Texas Cuban, is built on a base of roast pork tenderloin.

Instructions
1. Make the sauce: Heat the olive oil in a small, heavy saucepan over medium-high heat. Add the garlic and cook until fragrant, about 1 minute. Add the lime juice and cumin, then season with salt and pepper to taste. Let the mixture come to a boil, then remove it from the heat. The Mojo Sauce can be stored in the refrigerator, covered, for up to 1 week.

2. Make the sandwich: Using a knife, split the sandwich rolls in half and spread butter on the inside and outside of each half. Arrange the pickle slices and the slices of pork on the bottom half of each roll. Sprinkle 1 tablespoon of mojo on top of the pork. Top the mojo with slices of ham, then place 2 slices of Swiss cheese on the ham. Spread yellow mustard on the cut side of the top half of each roll and place these on the sandwiches.

Note: If you decide to roast a pork tenderloin, remember it cooks quickly in a 350°F oven. An average tenderloin weighs a little less than a pound and cooks in about 20 minutes.