Backstory Among the kitchen crew at Kevin Gillespie’s Glenwood Park restaurant, Ward is the modernist—the one who likes to take recipes that are part of American pop culture (beef Wellington, ranch dressing, cheeseburgers) and reimagine them.

Recently the Atlanta native called his grandmother, Georgia Mayfield, for the applesauce cake recipe that has starred at more family functions than he can remember. It’s based on an old Appalachian dish she learned from her mother and simplified to fit her working-mom lifestyle. After she walked him through the steps, Ward warned her: “Now MawMaw, here’s the thing. I’m going to do a very different version from yours.”

Ward starts with essentially the same ingredients his grandmother has dictated, down to the Betty Crocker SuperMoist yellow cake mix. But then, Ward takes a dramatic detour, using tricks he has picked up by devouring Nathan Myhrvold’s Modernist Cuisine book series and studying YouTube cooking videos. “My modern style helps hide the flaws,” Ward said. “If I mess up an apple pie, I can just bust it up and make it look intentional.” Which is exactly what he does with the applesauce cake.

He uses a microwave and extra layers of heavy-duty plastic wrap to concentrate the flavor of apples, and a nitrous oxide–charged whipped cream maker to aerate the cake batter, which he nukes in individual disposable cups. For the final presentation, he slings a spoonful of apple butter onto a dinner plate Jackson Pollock-style. Chunks of cake, mounds of gingersnap crumbs, spoonfuls of apple chunks, drizzles of caramel, and a well-placed scoop of his favorite ice cream—Morelli’s salted caramel—artfully follow.

Ward takes a bite and nods. “This is basically what my grandmother’s applesauce cake would taste like if it exploded on the plate.” Success!

Place the sliced apples in a microwave-safe bowl; wrap the entire bowl tightly in 4 or 5 layers of plastic wrap. Microwave on high power for 8 minutes. With a sharp knife, slice open the plastic and let the steam escape. Wear a mitt and avert your eyes to avoid getting burned. Remove the plastic wrap.

While the apples cook, cut the butter into tablespoon-size pieces and place it in a small saucepan. Melt the butter over medium heat and then stir in the powdered milk. Cook, stirring, just until the butter turns the color of peanut butter and becomes fragrant; then remove from the heat.

Place the cooked apples in a blender with the brown sugar, apple pie spice, ginger, salt, and lemon juice. Puree with about two-thirds of the brown butter, taste, and add more brown butter if desired. Makes about 5 cups.

To make the caramel: In a heavy, medium-size pot, sprinkle the sugar in an even layer. Cover with water so the mixture becomes the consistency of wet sand. Cook on medium heat until the sugar dissolves and the mixture turns amber. Watch closely, swirling the pot occasionally to melt any sugar clumps. If necessary, add a few drops of lemon juice to stop crystallization. Brush any sugar crystals that form along sides of pot with cold water. Mix in the apples. Remove the pot from the heat and quickly transfer to a bowl. While still hot, cover the bowl completely with 4 or 5 layers of plastic wrap. Set aside. Plastic should balloon up, and then collapse as apples cool, further infusing them with caramel flavor. (If not, it will still taste good!)

For this recipe, you will need a whipped cream dispenser, available at kitchenware stores such as Williams-Sonoma. You will also need at least 6 microwave-safe paper cups, about 6-ounces each.

To make the cake: In a blender container, combine the cake mix, water, oil, and eggs. Blend on high for 2 minutes until smooth, scraping down the sides of the container as needed. Transfer the batter to the canister of a whipped cream dispenser, filling up to the maximum filling line. (You will have a lot left over. Pour leftover batter into greased muffin tins or a cake pan and bake conventionally, according to the box’s directions, for another use.)

Screw on the lid of a canister according to manufacturer’s instructions. Fit the canister with a piping tip and a charger; charge the dispenser twice. With the tip of a sharp knife, make 4 thin vertical ¼-inch slits around the bottom edge of each cup.

Spray the first cup with a nonstick spray. Shake the canister vigorously several times. Turn the canister upside down and squirt enough batter to fill each cup about 1/3 full (do not overfill; it could overflow while baking).

Bake in a microwave set to 45 seconds and the 8 power setting. Remove the cup from the microwave; turn the cup upside down and release the cake onto a work surface. Break the cake open to test for doneness: It should be cooked through but still moist. If it is brown in the center it is overcooked. (You may need to experiment with the first couple to get the timing and setting just right. Remember, you have plenty of batter.)

Repeat with the remaining cups. Shake the can vigorously between squirts. Use as directed in recipe above. (Note: The cake dries out quickly, but this is all the better for absorbing sauces and juicy toppings such as those in this recipe.)

To assemble: On each plate, “splatter” some of the apple butter decoratively with a big spoon. Arrange chunks of cake atop the apple butter, along with mounds of gingersnap crumbs. Spoon apple chunks with caramel sauce over the cake. Place a scoop of ice cream in the center and serve.

A version of this article appeared in our May 2014 issue. 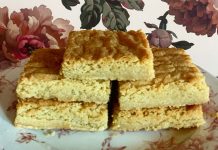 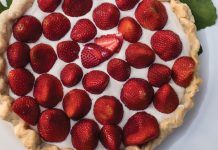 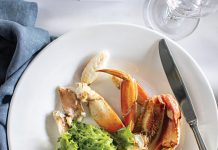 Recipes: A twinkling holiday supper at Hudson Grace, where the South meets California